No Gaming Deal in Pennsylvania 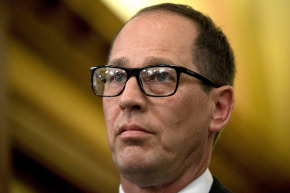 As Pennsylvania’s new fiscal year, which began July 1, approached the end of its first week, lawmakers were still at odds over a budget and accompanying legislation to expand gaming on which Governor Tom Wolf has depended for a significant portion of the income on the ledger.

Wolf included $250 million in projected revenue from gaming expansion in his $32 billion budget package. That includes income from legalized online gaming and daily fantasy sports, as well as gaming on tablets at airports and other expansion measures. However, the legislation that would authorize the measures—as well as a new plan for local casino host fees to replace one found unconstitutional last year—is mired in a stalemate over an expansion provision included in a hastily approved state House bill that would authorize an estimated 40,000 gaming machines in bars and taverns across the state.

Senate President Pro Tempore Joe Scarnati told reporters last week that lawmakers are considering borrowing more than $2 billion to temporarily close the budget gap while the gaming measures are debated. At press time, there was no word of progress on the legislation.