NY Casinos Could Be Closed through June 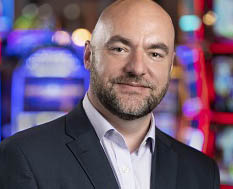 New York has been the epicenter of the Covid-19 pandemic in the U.S., and the state’s casinos may be among the last in the nation to reopen. “We’re hanging in there,” said Lance Young (l.), general manager of del Lago Resort & Casino in Seneca County, while waiting for the state to act.

There’s no word yet from New York Governor Andrew Cuomo on when the state’s casinos will be allowed to reopen. Meanwhile, properties are formulating their business and safety plans, to be prepared when that day arrives. Although the state is the hardest hit in the U.S. from the virus, the casinos are located north of the epicenter of New York City and its suburbs. Yet the wait continues.

“We’ve been in pretty regular contact with the (New York) Gaming Commission,” said Lance Young, executive vice president and general manager of del Lago Resort & Casino, in the popular Finger Lakes tourist region. “We’re monitoring what other states are doing, looking at companies like Wynn and MGM, among others, and the reopening in Macau.

“We haven’t received guidance from the commission yet,” he told GGB News, “but obviously we’re expecting that.”

Discussions and information-sharing among the state’s operators have been a vital part of the preparations, Young said. “We’re all kind of talking back and forth about the things we hear from around the country, making sure we’re all aware of best practices.”

The state’s 20 casinos and racinos, including six tribally owned gaming halls, have been closed since March 16. Given the devastation Covid-19 has visited on New York City, making it the epicenter of the outbreak in the U.S., it’s expected the state’s casinos will be among the last in the U.S. to reopen,

If it’s any indication, Rivers Casino & Resort in Schenectady—about 170 miles north of New York City—issued a statement to GGB News saying it expects its staff to remain furloughed at least through June 30. And MGM Resorts International has said its Empire City racino at Yonkers Raceway probably will be the last to reopen of the company’s 24 properties nationwide.

Needless to say, the closures have hit the sector hard. Two off weeks in March cost the upstate commercial operators𑁋including del Lago, Rivers, Tioga Downs near Binghamton and Resorts World Catskills in Monticello, about 90 miles north of New York City𑁋at least $32 million in gaming revenues alone, based on gaming commission figures from 2019. If the shutdown lasts through June—and indications are it will—lost revenues could total $153 million or more.

The impact on New York’s treasury has been severe. Already out some $2.8 billion in its fight against the pandemic, which has infected more than 330,000 statewide and claimed more than 21,000 lives, the state expects to lose around $34 million in casino taxes and $387 million of what it normally collects from the video lottery sector.

At del Lago, which has furloughed around 1,100 workers, Young said, “We’re just hanging in there We’re hoping to reopen as soon as we can.”