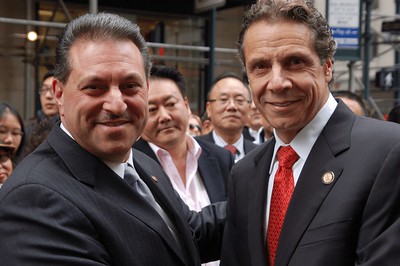 Will he or won’t he?

New York still awaits support from Governor Andrew Cuomo for mobile sports betting. The deciding factor could be allotting revenues from online wagering to help balance a $6 billion budget deficit, according to LegalSportsReport.com.

“I am more optimistic this year than last year,” said Senator Joseph Addabbo Jr., who sponsored the sports betting bill that passed the Senate last June. “I can only hope it’s in (Cuomo’s) State of the State or budget talks. He has to understand that you’re in a fiscal situation here, and can’t cut your way out of a $6 billion deficit. A significant source of new funds is going to be needed.”

Mobile sports betting alone isn’t going to put much of a dent in the deficit. Including the $12 million licensing fees proposed in the bill, sports betting could contribute in excess of $100 million to state programs. Addabbo also advocates for issuing three casino licenses to facilities in the New York City area, which he believes could take more than $1 billion off the deficit.

Last year, the state Senate included mobile betting in its state budget proposal, but the Assembly and Cuomo weren’t willing to consider it.

But with a Medicaid shortfall fueling fiscal woes, they might be more open to exploring such avenues for new revenue.

The New York Post suggested legislators and the governor are wary of raising taxes or cutting spending when they are all up for re-election this year.

“The bottom line is we’re leaving hundreds of millions of dollars on the table, and we need it now,” Addabbo said.

Cuomo delivered his State of the State address on January 8, but failed to mention mobile sports betting. His executive budget proposal is due by January 16. Even so, it could be added in through negotiations with the Assembly and Senate at any point before the final budget is due April 1.

Addabbo considers a change in the governor’s legal counsel as another potential positive sign. The prior counsel believed mobile wagering was

unconstitutional. Assemblyman Gary Pretlow and Addabbo, who chair the gaming committees in the legislature, argue that mobile sports betting takes place at the servers located on casino property. Therefore it would be included under a previous constitutional amendment that authorized casinos and New York sports betting.

Cuomo’s new counsel, Elizabeth Garvey, has expressed willingness to look at the constitutionality of mobile betting. She used to serve as legal counsel for New York Senate Republicans, where she worked on gaming policy with Addabbo’s committee chair predecessor, John Bonacic.

Still, Cuomo has downplayed the revenue online sports betting could generate. “You think the revenue from sports betting is not going to be significant enough?” Addabbo asked. “Come on, you’re New York State. The leagues are headquartered in your state.”

With December numbers yet to come in, New Jersey sports betting is on pace to take in about $40 million sports betting revenue in 2019. New York’s population is more than twice that of New Jersey. Addabbo called on Cuomo to put aside his feelings about gambling to bring jobs and revenue to the state:

“I know the governor is not crazy about gaming. I love sports, but I’m not a sports0betting guy. I don’t think I’ve placed a sports bet in my life. But this isn’t about me. I fight for it because of what the state is missing out on in revenue and jobs. When you’re in the position of elected official, you look at the big picture. You take personal feeling out of it, and do what’s best for our state.”

Sports betting expansion alone isn’t going to affect New York’s massive budget significantly. Combined with three new casinos licenses, however, the gaming package could save a lot of state programs from the ax. New York voters authorized up to seven casinos in 2013, with the first four located upstate to spur economic growth in the region. The moratorium for issuing the next three casino licenses expires in 2023, and Cuomo previously opposed moving up the timeline.

Addabbo scheduled a hearing on the economic impact of the unused downstate casino licenses for January 22 in the Senate Racing, Gaming and Wagering Committee. A gaming study being conducted by Spectrum Gaming Group will analyze the market for mobile sports betting and casino expansion. “Hopefully, we can convince the budget office to put servers on the lands of licensed casinos and let’s realize this revenue,” Addabbo said. “All arguments point to why we should do mobile sports betting and grant the three casino licenses.”