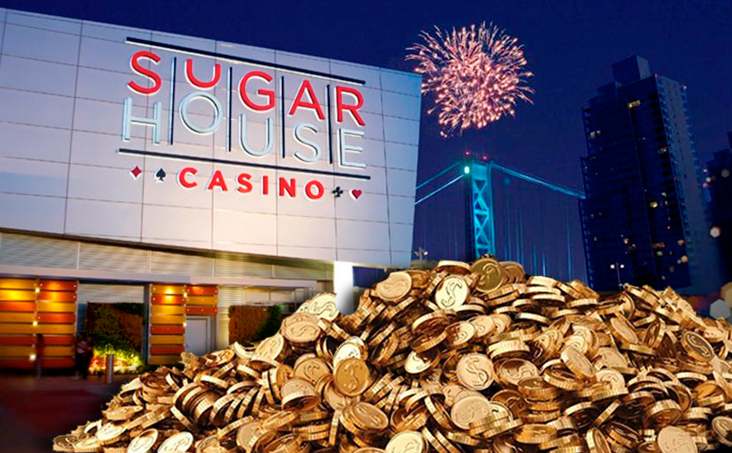 With a little time to kill before her favorite TV show on Monday, Cathy decided to play Divine Fortune, a progressive slot at PlaySugarHouse.com. The game lived up to its name—the Canton, Pennsylvania grandmother is now richer by almost $380,000.

For Cathy, the choice was an unusual one; she isn’t a habitual player, and with a stack of overdue bills, she reasoned she could put her money to better use.

But with 10 minutes to go before her favorite TV show, NCIS, Cathy says she was compelled to play. She’s glad she did. Moments later, on a $1 bet, she won a life-changing jackpot totaling $376,893—the biggest Divine Fortune jackpot in history.

“It was mind-blowing,” she says of her big win. “I don’t play much, mostly because I don’t have the money. But that night, I thought, ‘It’s now or never.’”

At first, it didn’t dawn on her that she had won the progressive mega-jackpot. “When I finally realized it, I dragged my husband in from the other room and said, ‘Look, look at that! That’s real money, and it’s mine!’”

Cathy is overdue for some financial good luck. In 2014, her grandson Kiel was diagnosed with cancer; he passed away in March 2017, at just eight years of age. To help pay the medical bills, Cathy and her husband had remortgaged their house; Cathy still works three part-time jobs, including one as a driver for Amish workers in their rural neighborhood outside Pittsburgh.

“We spent every dime we had, and would’ve spent more if we had it,” she says about the multiple treatment options they tried to save Kiel.

With her newfound riches, Cathy plans to buy “a newer truck” to replace her old one, which has racked up 300,000 miles. Her husband is equally extravagant—he’s going to get a lawnmower.

Beyond that, “I’m going to try to help my daughter get a new home—let’s face it, they’ve had a tough few years and I’d like to help them out,” says Cathy. She’s also considering making donations to organizations that helped her family in its time of need: Alex’s Lemonade Stand, named for Alexandra Scott, another Pennsylvania child who lost her battle with cancer, and Kisses for Kyle, in Willow Grove, named for two-year-old Kyle Snyder, who died of leukemia.

Asked why she chose to play Divine Fortune, Cathy says, “I didn’t think I’d win. I just enjoy the game. It has all kinds of different wild cards and free games.

“Obviously,” she adds, “it’s now my favorite!”She advises others to do as she’s done: play for fun, monitor wins and losses, and just enjoy.

As for her recent fortune—which also includes the $4,800 she won earlier this year at Tioga Downs Casino in New York State—Cathy says, “This year seems to be going better. On Monday night, something just told me to play.

“I’ve said I think it’s Kiel, looking out for Grandma.”

And Speaking of Big Winners—Pamela Does It Again!

A Deptford, New Jersey woman just hit the jackpot for a third time in six months on the same game, Divine Fortune, on New Jersey’s PlaySugarHouse.com.

“I really just cannot believe it,” says Pamela. “The odds of winning once is crazy, let alone twice—I knew I wanted to try for a third time, but didn’t really think it would actually happen.”

“It’s absolutely incredible to see the same player win again,” says Mattias Stetz, of Rush Street Interactive, operator of PlaySugarHouse.com. “It just goes to show that anyone can win with any bet at any time. We know we’ll continue to see more people playing in the hopes of having the same luck.”

Divine Fortune is responsible for more mega-jackpot payouts than any other progressive slot in the Garden State, hitting 14 times and paying out more than $1.7 million to players since its release in 2017. The video game slot set in the days of ancient Greece has also hit six times on Pennsylvania’s PlaySugarHouse.com, all within two weeks’ time, totaling for more than $3 million paid out to players in the two states.

MLB Lobbies for ‘I