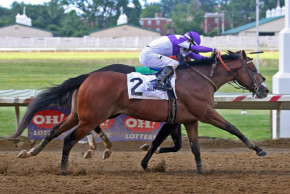 Sometimes you CAN throw money at a problem.

Horse racing and the casino industry offers a prime testament. Thistledown racetrack, outside of Cleveland, once posted staggering yearly losses. Now it thrives with a connection to Jack Entertainment, chaired by Cleveland Cavaliers owner Dan Gilbert. The nearly 100-year-old facility has been upgraded with 1,440 video lottery terminals, and is now branded as Jack Thistledown Racino, buoyed by the cross-promotion efforts of gaming, dining and entertainment.

This is an interesting synergy to watch. Casinos and racetracks were once sworn enemies. Some tracks that went out of business complained bitterly of nearby competition from casinos, which offered slots, simulcasting and entertainment.

And, then, the casinos began saving tracks by subsidizing purses. Delaware Park, for instance, was an intimate, yet nondescript facility until slot revenue elevated it. A later drop in subsidy, caused by the impact of nearby Maryland Live, shrunk racing dates and purses. Gaming influence also helps Ruidoso Downs in New Mexico, a stronghold of quarter-horse racing.

Thistledown, for its part, has “jacked up” its lineup, racing on Mondays, Tuesdays, Wednesday and Saturdays. The Ohio Derby, June 23, is its showcase event for the entire season. The race, now $500,000, is a major victory for the facility. It attracts top 3-year-olds for the 1 1-8 mile distance. Early probables included Lone Sailor and Flameaway, who competed in the Preakness and Kentucky Derby, respectively.

The Ohio Derby caps an excellent day for gamblers.

Santa Anita jumps in with the $250,000 Carlos Stakes. Canterbury, hardly known for large purses, nonetheless unfurls the $200,000 Mystic Lake Derby and the $100,000 Mystic Lake Mile, both on turf, along with the Lady Canterbury Stakes for $100,000. This is a nice three-race package, combining turf, dirt and the notion of a smaller track stepping to the plate. Ruidoso tosses in the $175,000 Mountain Top Futurity at five furlongs. Woodbine has the $125,000 Singspiel, a full 1 1-2 mile event on turf.

Around the Horn: Baseball

A tale of two 37-33 baseball teams. The Los Angeles Dodgers, whom we began touting four weeks ago as coming out of a 16-26 funk, brought a remarkable 21-7 run into the week starting June 18. The streak has been accomplished, for the most part, without Clayton Kershaw. This team goes on a monstrous run every year. They have a potential speed bump with the Cubs and Mets this week.

The Cleveland Indians, meanwhile, are due to bust out. They won a record 22 straight games last year and 102 overall. They have under-achieved with the same team and are projected to win 97 games this year. Near-term, you might find some bets.