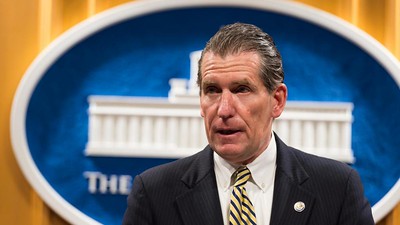 Ohio lawmakers will take up sports betting after the general election. State Senator John Eklund (l.) wants a 6.25 tax rate on sports betting revenue; the House is lobbying for 10 percent.

In Ohio, state Senate and House leaders, sports betting operators and Governor Mike DeWine’s office have been negotiating a sports betting bill, HB 194, which would allow statewide mobile and retail sports betting. The measure could be taken up in the Senate after the general election, before the end of the year. Sports wagering wouldn’t actually begin in the state for at least six months, observers noted. The House passed the bill in June and it was sent to the Senate but has not yet been assigned to a committee.

State Senator John Eklund said, “The notion of a deal and being close to a deal carries with it kind of this connotation to me, that it’s just a few jots and tiddles and all will be well and we’ll have sports betting in Ohio. But that’s just not the way it works. We’ve been talking and we kind of went through and did the best we could. We’ve not come to any kind of agreement among us, but we’re working on a document that would place some placeholders in those spots for conversation with leaders in both houses and other interested parties.”

Kindred and theScore recently announced deals to bring digital sports betting platforms to Ohio. Both companies secured market access to offer sports betting in Ohio through deals with Penn National, which owns Hollywood Casino locations in Dayton and Toledo plus a venue at Dayton Raceway. Kindred’s online platform is Unibet.

Eklund said House sponsors have “acquiesced” to having the Casino Control Commission as the regulator; under state Rep. Dave Greenspan’s HB 194, which passed the House earlier this year, most representatives wanted to create an 11-member Lottery Commission to oversee sports betting. Also, Eklund wants a tax rate of 6.25 percent, the lowest among U.S. states, while the House is lobbying for 10 percent. Eklund said the final rate most likely will be around 8 percent, which would attract operators.

Neither chamber supports using official league data or banning wagers on college sports. Still up in the air is the number of skins each of the state’s 11 casinos would be allowed.