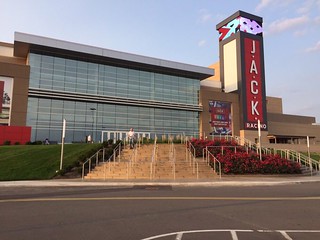 A sports betting bill will have its fifth reading in an Ohio House committee. If it passes, it could move to the full House. State Rep. Dave Greenspan's bill would allow sports betting at veterans and fraternal establishments. But the Senate version would limit sports wagers to the state's four casinos and seven racinos, including Jack Thistledown (l.) in North Randall.

In Ohio, state Rep. Dave Greenspan announced he’ll introduce three amendments to the sports betting bill H 194 at a House Finance Committee. Greenspan said the amendments will help strengthen the integrity of sports wagering. The hearing will be the fifth in committee for the legislation. Greenspan said a full House vote could take place later this month.

“I don’t think there is much opposition in the House, so I hope it can move quickly through the process. I would like to get it over to the Senate so we can start deliberating on the bill and have it enacted as quickly as possible,” he said.

Greenspan’s bill names the Ohio Lottery Commission to regulate sports betting. State Senator William Coley, president of the influential National Council of Legislators from Gaming States, has said he prefers this provision. However, State Senator John Eklund’s S 111 would establish the Casino Control Commission as the regulator of sports betting—the preference of Governor Mike DeWine. Greenspan said, “As far as the position of the governor, that’s something we’ll work through as the bill continues to move. The governor stated that he preferred the Casino Control Commission, but it was not an outright endorsement as I understand it.”

“Even in the House, expanding beyond casinos/racinos, veterans and fraternals would cause some concern among members. Members are comfortable with those being the initial locations. I can’t say in another one or two years that there won’t be more locations, but at this time, there is not support to expand locations beyond what is in the bill,” Greenspan said.

No Change In Michiga