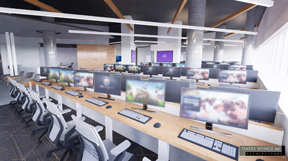 Ohio State is going all in to bring eSports to a new level. The university built a state-of-the-art eSports arena, will develop collegiate gaming leagues, and also plans to develop an academic major in the subject.

The Horseshoe in Columbus is the iconic home of the Ohio State University Buckeyes football team. Come September, an eSports arena will join the Horseshoe in this storied college town. The arena takes the eSports universe to whole new level.

According to a report in the Columbus Dispatch, Ohio State is among a growing number of universities nationwide expanding eSports programs to keep pace with the video gaming industry. Online gaming is poised to surpass the billion-dollar mark this year, the August 18 article said.

In addition to the arena in Lincoln Tower, Ohio State is creating classes and will offer a degree program for eSports.

There’s already a strong gaming community on campus, said 19-year-old Allison Dang, a biomedical science major from Gahanna. “We’ve had some difficulty holding in-person events with actual gaming rather than watch parties because it’s so hard to carry your huge (computer gaming) rig over. So having a game arena would be a really unique opportunity to have those events, bring people together, and play games.”

Professional eSports revenues totaled $875 million in 2018, according to a 2019 report from market research firm Newzoo. And it’s projected to surpass the billion-dollar mark this year. The global audience for eSports was about 395 million people in 2018 and is expected to grow to nearly 454 million in 2019, the report said.

In eSports, not unlike more traditional sports, spectators watch live matches and pre- and post-game analysis. In 2018, viewers watched nearly 1.3 million live hours of the top 25 video games on streaming services such as YouTube Gaming and Twitch.

In 2018, Activate, a New York technology consulting firm, estimated that by 2021, eSports will have more viewers than professional baseball, basketball and hockey leagues in the United States.

The arena at OSU will features more than 80 seats mixed among gaming computers, gaming consoles and virtual-reality systems. It also will feature a broadcast booth for students interested in streaming or covering eSports events.

The arena will also include space for Ohio State’s new eSports teams. The teams will compete with other Power 5 universities in a newly formed league commissioned by the Electronic Gaming Federation. Smith said the university expects to start three to four teams this school year—most likely for Overwatch, League of Legends, Rocket League and Hearthstone games.

“At the most competitive levels, they’ll go through the same things,” Smith told the Dispatch. “They’ll be recruited, have tryouts and a practice regimen that allows them develop as players and as a team.”

The university expects to offer an undergraduate major in game studies and eSports. The curriculum is still undergoing an approval process, with official enrollment planned for next fall, said Becky Bradshaw, program manager in the Office of Business Advancement. “We know that this is something that’s in demand and that students are very interested in,” she said.

Meanwhile, Ohio’s Casino Control Commission has drafted rules for fantasy sports wagering. Among them: a ban on team owners relying on autodraft to stock their fantasy squads. In autodraft, owners depend on a computer to randomly select their roster, which takes away the skill and leaves the outcome more to chance—hence, making it more akin to gambling.

The rule will apply only to games in which participants put up money and the operator takes a cut of the action. Office pools and leagues among friends where the entire pot is paid out, for example, would not be affected by the draft rule, said Jessica Franks, the commission’s spokesperson.

“It impacts only a small percentage of the overall games. It doesn’t strike me as a major prohibition or something that is inherently unfair. I think most people that choose to play for real money they want to exercise some kind of choice,” said Daniel Wallach, a Florida-based attorney who specializes in sports gaming law.

Franks said the rules would allow operators to apply for an exception.

Masters Fantasy Football Leagues intends to seek a waiver, said John Beese, a partner in the company based in Green, near Akron. The company offers season-long fantasy contests—as opposed to daily competition offered by some larger vendors—and Beese said the skill extends beyond draft day.

Season-long participants add and drop players to their roster, trade players with other participants and make lineup decisions on a regular basis, he said.

“At end of the season they won some money but they feel like Bill Belichick because it took them 16 weeks to get through it all. They’re involved,” he said.

In March 2018, the Ohio General Assembly passed a bill requiring fantasy sports operators to obtain a state license, banning contests based on youth and college sports and leaving it the Casino Control Commission to regulate the industry. The commission expects to vote on the final proposal in time for the NFL season, starting next month.

Operators will obtain a three-year state license and pay a fee of $30,000, $15,000 $9,000 or $3,000 based on the number of players they have in Ohio. A management company license, with a fee that is half that of operators, also would be needed. Operators would have to apply for a license within 30 days after it becomes available and would be allowed to continue operating until the commission acts on the application. Those operating contests that are free entry or not for profit would not need a license.

Athletes, referees and fantasy contest operators are barred from participating, and operators must offer a program for participants to institute a self-imposed ban on themselves, similar to a program in casinos.

The commission’s proposed rules also would ban proposition betting as part of fantasy sports. “That’s essentially a sports bet. There’s no skill as contemplated in the law,” Franks said. “The commission feels that’s starting to blur the lines between sports betting and fantasy contests.”