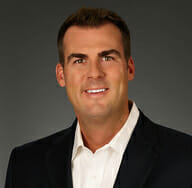 Oklahoma’s 15-year-old tribal gaming compacts will expire January 1, 2020. Governor Kevin Stitt (l.) said he wants to renegotiate them "to reflect the state of affairs today." The compacts give tribes exclusive rights to operate gaming in Oklahoma in exchange for 4 percent to 6 percent of revenue. The tribes are not happy about it.

Oklahoma Governor Kevin Stitt, concerned that tribal compacts in the state will end after 15 years on January 1, 2020, says it’s “imperative” that lawmakers and tribes “come to terms on new compacts prior to the end of the year.

“The easiest thing to do is simply renew the existing compacts ‘as is,’ rather than do the hard work of closely reviewing and negotiating new compacts that reflect the state of affairs today,” Stitt said.

The governor said he wants to work with tribal leaders “to discuss how to bring these 15-year-old compacts to an agreement that reflects market conditions for the gaming industry seen around the nation today.”

He noted that 15 years ago there was no tribal gaming industry in Oklahoma. To incentive the industry, the compacts gave the tribes exclusive rights to operate gaming in the state in exchange for paying the state 4 percent to 6 percent of revenue.

“This was reasonable and fair to help introduce the gaming industry in Oklahoma to the world in 2004,” Stitt said. “Today, Oklahoma’s fees are the lowest in the nation, with most gaming compacts requiring exclusivity fees of 20 percent to 25 percent.”

Stitt did not mention specific fee proposals, but said, “My intent is that any new agreement protects the dynamic success of economic growth and development for our tribal partners, while also fairly building the state of Oklahoma to the benefit of every citizen.” He added, “I believe that voters elected me to look at everything in state government with a fresh eye and, where necessary, make the difficult decisions that are in the best interest of all 4 million Oklahomans.”

A member of the Cherokee Nation, Stitt says tribal gaming is the eighth-largest industry in Oklahoma; the third-largest employer, providing more than 54,000 jobs; and the third-largest market in the U.S. behind Nevada and California. He pointed out that tribal gaming generates $4.5 billion in annual revenue for the tribes. The state hosts the world’s largest casino, the Chickasaw Nation’s WinStar World Casino in Thackerville.

Commenting on Stitt’s remarks, Osage Nation Principal Chief Geoffrey Standing Bear said, “Gaming has been the one area in this state where you’ve seen strong, consistent growth. It’s really important to remember that we can’t over-regulate and we can’t over-tax or put fees on these activities and expect them to be profitable. Because 100 percent of the profits of this enterprise goes to our people, for our culture, our education, our health. So when we tax on these enterprises, we’re taxing our people.”

John Berrey, chairman of the Quapaw Nation, which operates two casinos in northeast Oklahoma, said tribes don’t get credit for everything they’ve accomplished.

“What I don’t understand, in any of his op-ed, there’s no recognition of the true value of the tribes,” Berrey told the Washington Post. “(Native American tribes) are one of the largest employers in the state. We provide benefits for our employees. We’re probably the most philanthropic group in the state.”

Stitt was also criticized by the way his views were revealed.

“Coming out through an op-ed that was most tribes’ first notice was very surprising,” Matt Morgan, chairman of the Oklahoma Indian Gaming Association and a citizen of the Chickasaw Nation, said.

Stitt rejected that characterization, saying he made it very clear all along where he stood.

“Dating back to the campaign, I was transparent and clear that, as governor, I would seek a fair-market deal regarding the state’s tribal gaming compacts,” Stitt said in a written statement.

“I am equally committed to representing you in a manner that reflects the current fair-market contribution to the growth of the gaming industry and puts all parties in a position to achieve new heights of success for today’s citizens and future generations of Oklahomans,” the statement continued.