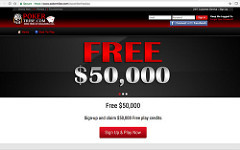 The Cheyenne and Arapaho Tribes of Oklahoma claim that Florida-based Universal Entertainment Group cheated them of about $13 million in a planned online gambling site to be called pokertribes.com.

The suit was filed by tribal governor Eddie Hamilton on behalf of the tribes in Cheyenne and Arapaho tribal court in Concho. The list of defendants includes Florida businessman Fred “Prince Fred” Khalilian, according to a report in newsok.com. The suit charges that Khalilian helped sell the tribes on the online plan.

“The transactions were marked by deceit, greed and utter disregard for the laws and economic well-being of the tribes,” the lawsuit claims.

The Cheyenne and Arapaho claim that Khalilian and his business partners from Universal Entertainment Group cheated them out of $9.45 million for the gaming website, which never was fully launched. The suit also charges that Khalilian and Universal Entertainment Group had no legal right to sell the Pokertribes.com software to the tribes, the report said.

According to the report, the suit says the gaming software was allegedly owned by one of Khalilian’s former business partners, who later successfully sued him in state court in Georgia over the rights to the product. The judgment was later overturned in Khalilian’s favor.

The Cheyenne and Arapaho folded plans for Pokertribes.com in 2014.

Speaking to The Oklahoman newspaper, Khalilian and several other defendants named in the suit called the suit politically motivated pointing out that Hamilton is up for re-election.

The suit comes as Universal Entertainment Group has recently partnered with the Perkins-based Iowa Tribe of Oklahoma to launch a new poker website. The Iowa Tribe has recently obtained an international online gambling license from the Isle of Man and plans to launch the site Pokertribe.com—just one letter different that pokertribes.com—in the next few months.

“Eddie Hamilton is a sore loser—that’s what he is,” Khalilian told the paper. “The Iowa Tribe has gone further than the Cheyenne and Arapaho ever did and Hamilton has egg on his face now.”

In a press statement, Hamilton said the lawsuit was the culmination of a lengthy investigation into the tribes’ past business dealings. The tribes continue to work with law enforcement to seek criminal prosecution of several individuals named in the lawsuit, Hamilton said.

“We continue to aggressively work with federal regulators and law enforcement authorities to bring about the indictment of those who have taken advantage of our tribes and misused our tribes’ gaming revenues,” Hamilton said. “We are appreciative of the cooperation and interest shared by those federal authorities and are proud of the strong partnership we have developed—particularly with our federal regulatory partners.”