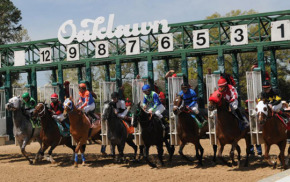 Tradition graces two Midwest tracks over the next couple of weeks.

Keeneland—the Horse Players Association of America’s first top track in North America—heats up its abbreviated campaign. It began April 4, resumes April 9 with an eight-race card, and goes until April 26.

This is a celebratory, short race meet punctuated by major events like the Blue Grass Stakes, which was run last weekend. The Kentucky track jams numerous stakes races into its meet. The race season is a community event around which the local tourist market revolves, just as Saratoga’s racing season brings vacationers to New York State in late July and August.

The Arkansas Derby is one of the last Kentucky Derby preps and its winners have done well in Triple Crown events. American Pharoah won here in 2015 before becoming the sport’s first Triple Crown winner since 1978.

Oaklawn decrees this weekend a festival. It begins Friday with the $500,000 Fantasy Stakes, continues with the loaded Saturday card and the $750,000 Apple Blossom Handicap and the $150,000 Fifth Season Stakes Sunday.

Top-level racing throughout the industry continues April 20 with the $2 million Californian at Santa Anita and, surprise, the $1 million Charles Town Classic at a facility not known for major purse money. But officials want to raise the reputation of their track.

Mark these recent stakes winners as candidates for big betting money when the Kentucky Derby arrives May 4:

All the above have distinguished themselves from much of the pack and will command interest during Derby week.

The Astros, Red Sox and Cubs have scuffled badly away from home to start the baseball season.

Now they’re coming off the road and merit consideration for the near future.

The Red Sox had an improbable 11-game road trip to start the season, a defense against the slew of April rainouts that mark many past seasons. Well, the defending World Series champs only won three games. They’re forecast to win nearly 100. Payback is coming.

Cubs pitching has been so bad they couldn’t get the Pope out. They’re projected to win 88 games but have only captured two. The Astros have shown signs of catching a groove. Excellent teams, playing way below their potential. Give it an eye.

Toronto is +140 against Boston despite being close to them in the standings, and the Penguins are a –140 against the Islanders, who gained more points at the end of the year.

Pittsburgh was playing better down the stretch. Columbus has never won a playoff series and is a whopping +280 versus Tampa Bay in a battle of two teams coached by John Tortorella.