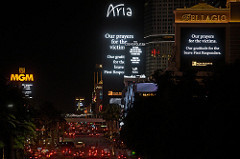 The bright lights of the Las Vegas Strip went dark last Monday night in remembrance of the 58 people killed and the hundreds injured one year to the day in the deadliest mass shooting in U.S. history.

Dimming of the resort marquees, along with the “Welcome to Fabulous Las Vegas” sign, started at 10:01 p.m., the moment the shooting started. Earlier in the day they displayed images of the Strip with a message that proclaimed “One Year Braver; One Year Closer; One Year Kinder; One Year Prouder; One Year Stronger. #VegasStronger.”

The city hosted a series of events in the days surrounding the anniversary, which was marked by gatherings of people at various locations along the famed neon boulevard waiting for the marquees to go dark.

A reporter for The Associated Press made note of a small bouquet of dried flowers wedged inside a padlock on a portion of a chain link fence surrounding the 15-acre site of the outdoor country music festival that descended into a bloodbath when Stephen Paddock, a resident of the nearby town of Mesquite, opened fire on the crowd with an arsenal of automatic and semi-automatic weapons he’d brought to a suite on the 32nd floor of the adjoining Mandalay Bay hotel. Paddock killed himself as police closed in, leaving whatever motive he had for his madness to die with him.

The white crosses placed at the “Fabulous Las Vegas” sign last year for each of the dead were moved for the anniversary to the rotunda of the Clark County government building, where they were displayed with photos of the victims. News reports say a museum is planned in the suburb of Henderson where they will be housed permanently.

All but five of the more than 500 victims were tourists.

Some “scattered remembrances” of the tragedy were visible elsewhere around town, AP said—among them a makeshift memorial garden Downtown comprised of painted stones and pictures hung in newly planted trees.

But residents and tourists alike appear mostly to have moved on, the wire service said.

“We don’t have a lot of long traditions here. You can see it with buildings. Casinos come up, casinos get knocked down. People tend to look forward, not back,” said Pauline Ng Lee, a community activist and chairwoman of the Nevada Republican Men’s Club.

“A lot of people have probably put it out of their minds,” said Steve Sisolak, who chairs the County Commission and is a 2019 gubernatorial candidate. He said he expected the anniversary “to bring up a lot of feelings, good and bad.”

Much of the bad feelings have centered on lawsuits filed nationwide by victims and their families seeking damages against casino giant MGM Resorts International, owner of Mandalay Bay and the site where the massacre occurred.

Perhaps the worst feelings, though, were engendered by MGM itself, which earlier this year sued 1,900 of the victims in federal courts in nine states in a bid to leverage a post-9/11 federal law that immunizes companies from liability for acts of terrorism if they’ve pursued and received a special anti-terrorism certification from the Department of Homeland Security. The company that organized the music festival has that certification, and MGM argued that as the contractor it enjoyed the same protections. The lawsuits were filed in a bid for federal jurisdiction over the myriad damage claims MGM faces in state courts so the company could make its case for immunity.

The suits sparked an outcry from attorneys for the victims and a social media campaign to boycott MGM properties. An assemblywoman from Queens, N.Y., has gone as far as calling on the state Gaming Commission to void the company’s planned $850 million purchase of Yonkers Raceway and its adjoining Empire City Casino.

“These victims have already suffered through an unimaginable trauma,” she said. “It is unconscionable for MGM to use a twisted legal strategy to prevent them from seeking damages and holding the company accountable for its failure to adequately protect them from harm.”

An effort by MGM to have the 19 suits that have be filed this for against the company for alleged shortcomings connected to the October 1 shootings failed last week. A federal court permitted all suits to go forward separately, and MGM said it would defend each individually in that case.