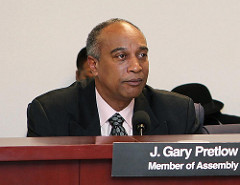 West Virginia has become the eighth state to introduce online gambling legislation this year, but one that was considered a possibility has been backed down.

According to the bill, “Developments in technology and recent legal decisions have created an opportunity to legalize interactive poker as a means to further enhance and complement the benefits delivered by casino gaming and licensed facilities to or for the benefit of the communities in which they operate.”

In New York, hopes are dimming that the regulation of online poker will be fast-tracked through the New York legislature, says one of the industry’s principal backers in Albany.

Assemblyman Gary Pretlow, whose legalization bill appears to be stalled in the lower house, told internet news site Online Poker Report that Assembly leaders are not convinced that poker in its web iteration offers enough of a skill component to evade the state’s requirement that any expansion of gambling beyond lotteries, horse racing and casinos must be approved by constitutional amendment.

“It won’t be in the final budget, I don’t believe, because there are people opposed to it who are higher than me and don’t want it in the budget,” Pretlow said. “They want to do it separately and want to look at it more fully.”

Skill remains the primary issue, but not the only one, he said.

“When you question a poker player, one of the skill factors is defining tells in your opponent. There are no tells in online poker. You can’t read a facial expression. There is no interaction between players. To read the movement of an opponent―how they fumble chips―none of that is available in online poker. If you’re just dealing with the math―the algebra of poker, as I call it―yes, there is skill there. But the other factor is reading your opponent, and that’s not there. It’s a question people have of me that I have yet to answer. We’ll probably overcome it, but it’s a battle.”

Concerns about the potential for cheating and collusion are also obstacles.

“I’ve been told there are algorithms in place to stop that from happening,” Pretlow said. “But I probably need a better answer than that. It’s not stopping me from moving forward, it’s just a question I need answered.”

The New York Senate overwhelmingly voted last year to legalize online poker and is expected to do so again this year. Sen. John Bonacic’s companion bill has already unanimously moved through his Senate Racing, Wagering and Gaming Committee.

Pretlow’s 2016 bill died in the Assembly, and his new one, which is under consideration in the Racing, Wagering and Gaming Committee, which he chairs, also needs to pass muster in the Codes, Rules and Ways and Means committees.

Rather than see it die in one or more of those he said he plans to hold it back until he knows it will go through.

“When the people opposing it at higher levels than me come to see my point of view, it will move forward,” he said.

West Virginia has a state lottery plus five land-based casinos including four racinos. It also allows gambling at bars. In 2016, the state’s casinos won $638.5 million from gamblers, a 2.6 percent drop compared to 2015. This year, gambling revenue is down 15 percent year-over-year, according to University of Nevada Las Vegas data. The $1.4 billion MGM National Harbor casinos opened in December, a one-hour drive Hollywood Casino at Charles Town Races. The best year for the state’s casino industry has been 2007 when revenue reached $972.6 million.

A recent report by the American Gaming Association stated, “Over the past decade, West Virginia’s casino industry has seen an explosion of competition from surrounding states. In 2006, none of its neighbors had casinos. But today, there are a total of 28 casinos operating in three of the five states that border West Virginia.”

Earlier, Fluharty introduced legislation stating the Professional and Amateur Sports Protection Act of 1992 that banned sports betting was “unlawfully enacted.” House Bill 2751 would legalize sports betting pools at licensed gaming facilities. Fluharty said the American Gaming Association estimated $10.4 billion will be wagered illegally on the men’s college basketball championship. “Imagine the money West Virginia could make on March Madness if we passed my sports betting bill. West Virginia will get $0 from it. Let’s change that,” he said.

Also in West Virginia, Senate Bill 437 would redirect $15 million from the Greyhound Breeding Development Fund to the state’s Excess Lottery Revenue Fund for use by the legislature to help fill the state’s $455 million budget gap.

Steve Sarras, president of the West Virginia Kennel Owners Association, explained the fund spurs $17.9 million in annual business activity, $4.6 million in employee compensation and $213,900 in tax revenue for Ohio County alone. “I am telling you, if this passes, kennels will not be able to afford to operate.” He said eliminating the fund would be “a death blow. When you take away the breeders’ fund, you unemploy anyone who is involved in the industry in West Virginia.”

State Delegate Erikka Sortch said, “It is a total misnomer that it is a subsidy. If you don’t go to the casino and don’t gamble, none of your money is ever going to go to the greyhounds.”

Fluharty added, “All of this money is raised at the track. This is not a situation where taxpayers are funding this through income taxes or any other taxes applied to the general public. A lot of people depend on this industry. I will oppose any bill that is clearly going to cut revenue and jobs in West Virginia.”