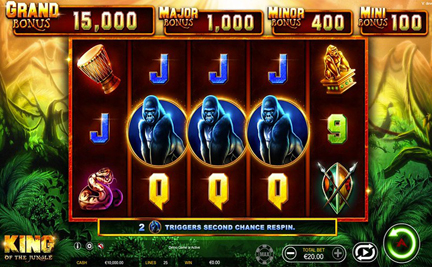 They’re brand-new at an online casino near you: two fresh online slot games. Here’s the lowdown on King of the Jungle by Ainsworth and Flamenco Stacks by AGS.

King of the Jungle

The online slot game King of the Jungle by Ainsworth features an entertaining jungle theme and a frequent free-spin bonus, boosted by a primary-game hold-and-re-spin feature.

The bonus awards 10 free games. During the free-game feature, wild symbols carrying multipliers of 3X and 5X appear on reels 2 and 4, respectively, multiplying any wins including those symbols by three or five. Two or more gorilla symbols on a free spin award five additional free spins.

Also during the free-games feature, if the “Gold Gold Gorilla Eyes” symbols appear stacked in all three positions on any reel, it triggers one of the four bonus awards displayed on the screen—a Mini award of 100 credits, a Minor award of 400 credits, a Major award of 1,000 credits, or the top Grand award of 15,000 credits.

This sign-up just got a little sweeter! Create your new-player account at PlaySugarHouse.com, and your first casino deposit will be matched by 100%, up to $250!

The online slot game Flamenco Stacks is part of the popular AGS Lucky Stacks family. It features four jackpots levels, along with an Expansion Feature, Gold Reel Feature, and a “Choose Your Volatility Free Game Bonus.”

The base game is a five-reel, 50-line slot featuring a Spanish flamenco dancing theme. When the Flamenco Stacks symbol lands on reel five, it triggers the Expansion Feature. This expands any gold background symbols on the reels to form full stacks of gold background symbols, which can award one of four jackpots.

Once the player has selected, the game will transition back to the base game reels, where the wins from the triggered spin are won. Then the game transitions to the corresponding free games background, accompanied with the “Wilds Adding” animation. Free games can also be retriggered, which can Flamenco Stacks a lucrative game.

Now that’s rich! Get a $300 bonus when you sign up to play online slots at CaesarsCasino.com. Your first deposit will be matched, dollar for dollar, up to $300. New players only.

Be a better bettor! Learn the ins and outs of online slot games here: https://www.igamingplayer.com/play-online-casino-games/