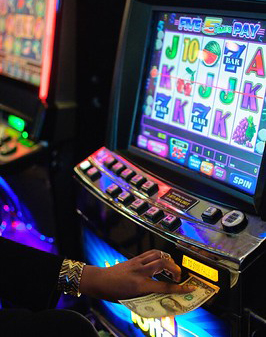 Hundreds of bars and restaurants in Oregon are shuttered because of the Covid-19 pandemic. The ones that have video lottery terminals (l.) are being ordered to pay taxes on the machines. The Oregon Lottery says it has no other legal option.

The Oregon Lottery is collecting taxes on thousands of video lottery terminals (VLTs) that are owned by hundreds of taverns and restaurants that are closed and not allowed to turn the machines on.

One restaurant owner among 550 in the state was forced to pay $2,082 on six VLTs that have been turned off since March 17. She has 18 employees and is struggling to survive.

Matt Shelby, spokesman for the Oregon Lottery, told KGW-TV that the lottery doesn’t have the authority to waive the taxes, which it collects annually for the Oregon Department of Revenue.

A spokesman for the department commented, “Taxes were incurred before the terminals were turned off and the retailers were compensated for the earnings, which triggered the additional tax.” The department says it is willing to work with the retailers on payment plans.