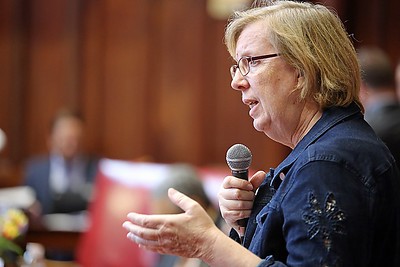 Meet the new casino bill; just like the old casino bill. But with a few tweaks. Connecticut state Senator Cathey Osten, whose district includes both tribal casinos, for the third year running will introduce gaming legislation that she hopes will square the circle of gaming challenges that have eluded lawmakers for several years.

In an exclusive interview with GGB News, Osten sounded confident of passing a comprehensive gaming bill (The Connecticut Jobs and Revenue Act) when the 2021 session begins in January.

The bill Osten plans to introduce will be very similar to ones she has sponsored before. “I’m tightening up the language a little bit,” she said, reminding the listener that right now she has more important things to worry about. “We are all in the election season again, and should I be reelected I will submit it again.”

She wants to do something to give Foxwoods and the Mohegan Sun a hand up given the challenging circumstances that casinos now face in New England.

“I’m sure we’ve heard that the Wynn in Boston is closing except for weekends and MGM in Springfield is not doing well either. Both of the tribal nations in Connecticut have opened up and are doing well and they have started to fill Connecticut’s coffers with gaming dollars,” said Osten. “They have not opened up completely. They are twenty-five percent open because we aren’t at consumer confidence levels. People are cautious about being in large crowds. We’d like to get them back up to one hundred.”

Her bill would take that next step by “modernizing gaming,” she said. “What my bill does is it allows online gaming, keno, lottery; plus sports betting, both on premises and online.”

Her bill would address the tribes’ insistence that they have exclusive rights to sportsbook, which they insist is a casino game, and therefore addressed by their existing tribal state gaming compacts. “I believe, based on the Rhode Island case, it has been determined that sports betting is a casino game.”

Osten is referring to the Rhode Island Superior Court case where that state’s sports betting bill was challenged by an opponent. The judge in the case, Brian Stern, ruled in June of this year, “The court finds that based on the plain language of the Referenda Questions and the definition of casino gaming in the Handbooks, voters had ‘fair notice’ that they were broadly approving all casino gaming and any other game included within the definition of Class III gaming,”

This supports the tribes’ contention that sports betting comes under the definition of Class III, i.e. Las Vegas style gaming, she says.

Addressing the challenge to the Connecticut tribes’ exclusivity claims by Sportech OTB, which also wants to be able to offer sports wagering, Osten added, “I would remind everybody that Sportech has exclusivity in and of itself [for Off Track Betting.] They have their own form of exclusivity. We would go with the compact that has served Connecticut so well with almost $9 billion in revenues and more than twelve thousand jobs when they are fully up and operating.”

Asked whether Governor Ned Lamont is on board with her revised bill, Senator Osten said, “I talk to the governor and his staff regularly about this bill. That’s a question for the governor, but there’s no reason for him not to support it. It’s extremely important in Eastern Connecticut.” That’s a region that hasn’t gotten as much financial benefit from tribal casinos as it should have over the years, she says.

Lamont’s director of communications, Max Reiss, recently called 2020 “a good time to move forward on legalizing sports betting. We’d like to continue the discussions throughout the upcoming session. It’s important for the state of Connecticut not to be left behind with this new opportunity.”

Noting that when both casinos closed in March due to the Covid-19 lockdown, “It increased unemployment,” she said. “Norwich, the largest town that I represent that works with the casinos intimately had forty-five percent of its labor force touch the unemployment system. The other towns surrounding there also have high unemployment. Norwich is where many of the people live in rental units and work at the casinos.”

Osten’s bill does have a sweetener to try and attract support from other regions that also want some of the gaming pie. “My bill does allow a casino in Bridgeport and entertainment zones in Hartford,” she said. “Quite frankly, until we get the two flagship casinos up and running again one hundred percent, all of that will have to be stalled.”

One part of Osten’s bill that doesn’t get talked about much, she says, is that it dedicates the extra money that will be generated by sports betting, online keno and online lottery to small towns and cities around the state. “One hundred and sixty-nine towns get money from the grant funds. This additional funding would be parsed out among them to help them with property taxes, allowing municipalities to have a little more revenue.”

Currently almost all of that funding comes from the 25 percent share tribes pay on their slot machine profits. Her bill would put more money in that fund.

The beauty of that money, she said, “It’s not restricted to any sector. It gives them

funding that is at their discretion. Increasing what comes that would go to the municipalities. That would give everyone a stake in keeping these two tribal casinos going. It’s not money they are getting now. If we increase all the online gaming, it would be an additional $40 million.”

She adds, “It’s basically a very simple bill,” that she has been promoting for three years.

The money that tribal casinos have paid into the state budget has been shrinking from the peak years of 1998 through 2002. In that period, the Mashantucket Pequot and Mohegan Fund was about $135 million annually.

It has been in decline since then so that in FY 2019 the state’s cut of slots revenue fell to $255.2 million, and the fund’s share of that was just under $50 million, the lowest ever.

The senator’s bill aim at restoring the fund through the additional games, and the fact that the tribes will eventually open a third, satellite casino in East Windsor, which will not only have slots but tables. That casino has been blocked at every turn by a fierce legal and political scorched earth campaign by MGM Resorts International, which is trying to protect its MGM Springfield property in Massachusetts.