Utah and the overs for Alabama-Texas A&M and Illinois-Iowa are the three bets our college football writer likes this week.

There’s nothing like a good coaching feud to restore your belief that college football coaches actually have personalities and aren’t animatronic control freaks. Nor is there anything more disappointing than that feud allegedly ending with compliments all around.

Or did the feud end? We’re betting bad blood still flows like the Tide.

Meanwhile, one of the Pac-12’s surprises gets its opportunity to validate last week’s dominating win. Spoiler alert: it won’t be nearly as easy.

And yes, the Big Ten-and-counting brings you another game right out of the Pleistocene Era. Spoiler alert: the team known for games like this—yes, the one that just fired its head coach—isn’t involved.

When last we saw Texas A&M Aggies coach Jimbo Fisher and Alabama Crimson Tide coach Nick Saban mentioned in the same sentence, they were burying the hatchet after spending parts of the summer doing a credible impression of opponents in Wrestlemania.

This little tete-a-tete happened after Saban accused Fisher, his former assistant at the LSU Tigers, of buying the best-rated recruiting class in the country through the magic of NIL’s. After Fisher dropped the word “despicable” a good half-dozen times, he tried to sic reporters on Saban’s recruiting escapades, then told reporters, “We’re done.”

After the two pulled the hatchets out of each other’s backs, with Fisher saying at SEC media day the feud provided no motivation, every player from both teams and every media outlet in the SEC circled this game.

The bettors are circling this game expecting the Aggies to circle the drain. Alabama opened as 24-point favorites, sniffed 24.5, then dropped back down. This surprises nobody aware of the history between these two. The Aggies have lost their last four trips to Tuscaloosa by an average of 32.5 points a game. Money is running 5-1 on the Crimson Tide—who are 4-1 against the spread despite routinely giving upwards of 25 points a game to their routinely outmatched opponents.

We, however, are going with the Over 51.5. That total opened at 52, went to 52.5 several places, then dropped in the wake of Alabama quarterback Bryce Young’s shoulder injury in the Tide’s 49-26 victory over Arkansas. Young and his sprained shoulder are day-to-day, but if he can’t go, dual-threat QB Jalen Miroe—who ran for a 77-yard touchdown against Arkansas, and is one of the most athletic QBs in the country—assures the Tide will roll.

What Does UCLA Have for an Encore? 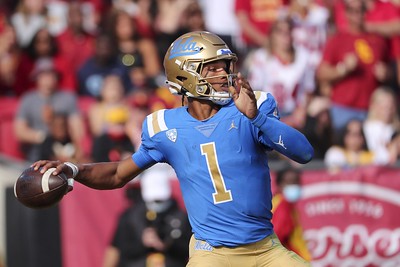 Last week the UCLA Bruins were finding every hole, gap and crevasse in the Washington Huskies’ defense in a Friday Night game not as close as the 40-32 finale indicated. The three-point, home underdog Bruins led by 24 points late in the third quarter before Washington scored a couple meaningless touchdowns.

UCLA sits atop the Pac-12 South with blood rival and future conference ex-pat USC Trojans. The Bruins average 41.1 points a game behind a flamboyant offense led by QB Dorian Thompson Robinson, who threw for 315 yards and three TDs, while running for another one against the Huskies.

This, however, is the deepest pool the Bruins have dived into this year. The Utah Utes have the Pac-12’s best defense, allowing only 14.4 points a game. They have a feral chip on their shoulders, failing to climb back into the top-10 after that season-opening loss to the Florida Gators, which resulted in an offense averaging 42 points a game. The Utes hit that number on the nose in their 42-16 pummeling of the Oregon State Beavers last week. 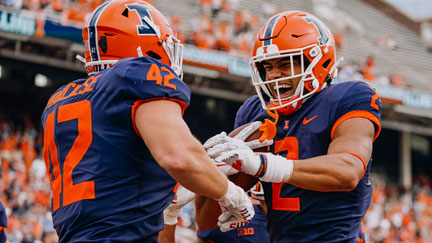 The last time we saw the Illinois Fighting Illini, they were getting Wisconsin Badgers coach Paul Chryst fired, the byproduct of Illinois’ 34-10 victory over the Badgers. Wisconsin will pay Chryst $16 million for him and his 67-26 record and two New Year’s Day bowl wins to disappear. They face the Iowa Hawkeyes this week.

Illinois and its cheese-grating defense proceeds merrily along, having yielded only 42 points in five games this year. Only the Indiana Hoosiers in their 23-20 victory nicked the Illini for more than 10 points a game. Illinois’ defense leads the Big Ten in scoring defense (8.4 points-per-game) and rushing defense (70.2). It’s the conference’s No. 2 team in total defense (229 yards per game), while leading the nation in scoring defense and pass efficiency defense and ranking third in total defense.

The only way to crack the Illini’s defensive nut is to fling quick passes to tight ends and running backs, which is what Indiana did. Meanwhile, Illinois takes its offensive shot with the nation’s leading running back, Chase Brown (120-733-4) against an Iowa defense ranked No. 3 in scoring defense (10 points per game).

This has all the hallmarks of a defensive struggle. And yet, like we successfully did two weeks ago with Baylor and Iowa State, we’re going contrarian again with the Over-35.5. Even putting aside the fact these two are 4-1 to the Over in the last five meetings, this low-rent total means a 19-17 slugfest sends you skipping to the window.

Have Devil of Time w