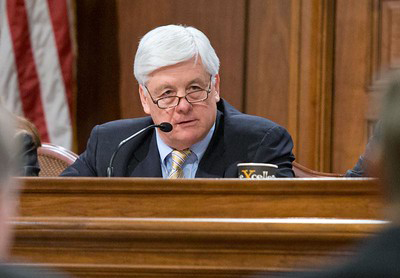 Republican lawmakers in Pennsylvania are pushing to legalize so-called “skill games” and VLTs in bars and restaurants before the legislature adjourns for the summer. State Senator Robert Tomlinson (l.) says legalizing the games is akin to “rewarding bad behavior.”

Republicans in the Pennsylvania state Senate are following lawmakers in other jurisdictions in pushing for the legalization of tens of thousands of so-called “skill games” currently operating around the state, as well as VLTs in bars and taverns, as time ticks away on the current session.

A draft bill sponsored by Senate President Pro Tempore Joe Scarnati is being pushed by out-of-state lobbyists representing companies like Georgia-based Pace-O-Matic, which distributes games under the “Pennsylvania Skill” brand that has appeared in convenience stores, pizza shops, laundromats and other diverse locations around the state.

The state’s gaming licensees, as well as law enforcement and gaming regulators, have considered these unlicensed, unregulated machines to be illegal slot machines. Many have been confiscated, leading to an ongoing court battle by manufacturers who claim they are legal because some dubious element of skill goes into determining the results.

Wyoming and Virginia recently passed legislation to legalize and regulate the unlicensed games, at least on a temporary basis. In Wyoming, the games must first be certified by a testing lab.

Scarnati’s draft bill would legalize the games as video lottery terminals, subject to regulation by the Pennsylvania Gaming Control Board to be taxed as VLTs, in the same manner as VLTs currently operating at truck stops in the state. However, the legislation would further legalize VLTs in an Illinois-style route operation in thousands of bars, taverns, social clubs and other liquor-licensed establishments—a provision intentionally left out of Pennsylvania’s 2017 gaming expansion bill, which legalized VLTs only in truck stops.

The VLT provision was left out of the 2017 bill largely because of opposition from casinos and the Pennsylvania Lottery, which view the machines as unfair competition because of the billions already invested in the legal gaming industry by heavily taxed licensees.

In an interview with the Philadelphia Inquirer, Senate Majority Leader Jake Corman said the expansion would serve to regulate an estimated 20,000 skill games currently operating in retail locations, many where children have easy access to the slot-like games. “They are everywhere and they are completely unregulated, and I think it’s time to bring them into the light of day,” Corman said.

Corman added that it would be unfair to legalize and regulate the skill games without adding VLTs in bars and taverns.

Other lawmakers do not agree with the proposed expansion. “The timing to me is just wrong,” Philadelphia-area state Senator Robert Tomlinson told the newspaper. “I believe we’ve expanded gaming enough, and that we should just eliminate (skill games) and not make them legal. We are rewarding bad behavior.”

There was doubt a bill could be introduced and voted on before the General Assembly adjourns for the summer July 8. Proponents say they will take the effort up anew in the fall.