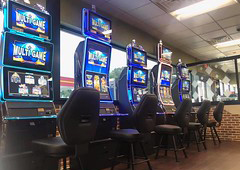 As the first video gaming terminals go live at truck stops in Pennsylvania, regulators work to approve more licenses—and more communities in Lancaster County opt out of the new program. Rutter’s truck stop opened the first gaming room (l.) and is suing to be able to open others in different municipalities.

On Friday, August 16, the Rutter’s truck stop and convenience store along Route 30 in York, Pennsylvania opened its gaming room, becoming the first truck stop location in the state to offer five video gaming terminals in a room tailored to the state’s strict specifications.

Nearly two years after Pennsylvania lawmakers passed a sweeping gaming expansion bill, truck stop gaming is finally here, with a dozen or more gaming rooms expected to open before the end of the year.

The provision of the 2017 expansion law permitting up to five VGTs at qualifying truck stops around the state was partly tailored on the VGT law in Illinois, with one huge difference: Unlike Illinois, there is no provision for VGTs at bars, taverns or private clubs, despite intense lobbying from the state’s tavern association. Illinois operators must compete with more than 30,000 VLTs at bars, taverns and truck stops, not to mention more new casinos, after the state passed its own massive gaming expansion bill this year.

The Pennsylvania legislature ultimately determined that VGTs in bars and taverns would saturate the gaming market, and threaten the cash cow provided by the 12 casinos across the state (soon to be augmented by a 13th in Philadelphia, plus several satellite “mini-casinos,” also created by the 2017 law).

Thus, the potential VGT market in Pennsylvania is a fraction of that in Illinois, not only because of the absence of bar VGTs, but because of more stringent requirements in Pennsylvania for truck stops. For instance, under a recent amendment to the Illinois law, truck stops averaging sales of 10,000 gallons of diesel or biodiesel fuel per month are permitted up to six VGTs each. A new “large truck stop” category allows up to 10 machines in locations with average monthly sales reaching 50,000 gallons. In Pennsylvania, locations must sell an average of 50,000 gallons to qualify for five VGTs.

Nevertheless, regulators are beginning to ramp up the new form of gaming. The Rutter’s location is one of 12 VGT licenses to gain final approval out of 71 applications so far.

According to Doug Harbach, spokesman and communications director for the Pennsylvania Gaming Control Board, applicants go through extensive scrutiny before an approval for VGTs. “They have to have a lot of things in order for us to recommend to the board an approval,” Harbach told GGB News.

“There are two phases. We have to look at criminal records; they have to attest to this and attest to that. We give them a conditional approval on that, and then we do more in-depth onsite inspections. That could be more than one visit—in order to make sure they are properly setting up the facility for cameras, and can sell the amount of gallons of diesel fuel they’re supposed to. That they have the acreage (the law requires at least three acres), that they have the parking spots for commercial vehicles the law outlines.

“All those have to be done, among other things, before an application can come to the board with a recommendation for approval.”

According to Harbach, the Rutter’s convenience store chain, which runs 72 stores in 14 counties across a vast swath of central Pennsylvania, has submitted the most truck-stop applications at 21. Five of those applications are for Rutter’s locations in Lancaster County, the heart of Amish country. That fact led to the first controversy surrounding truck-stop VLTs, as municipal officials began speaking out against any gambling in the conservative, rural region.

The dispute came to a head when the township of Strasburg used zoning laws to ban Rutter’s from opening a state-licensed VLT room in its store there, by reinterpreting those zoning laws. Rutter’s sued.

“All the things we were doing were perfectly legal in terms of our store being qualified for VGT gaming under the law,” Rutter’s CEO Scott Hartman told GGB News. “It was all primarily related to the fact that legislators in Lancaster County were still upset from two years ago when the law was passed, because they were not given the opportunity to opt out of VGT gaming at truck stops.”

The 2017 gaming expansion law provided local municipalities across the state 60 days to opt out of the mini-casino provision, banning the satellite facilities within their jurisdictions, with the option to opt back in at any point in the future. The same opportunity was not afforded the locals concerning truck-stop gaming.

“When the act passed, it gave them the opportunity to opt out of mini casinos, and they did, but it did not give them the opportunity on the truck stops,” said Hartman. “So, they were still sort of festering that resentment over in Lancaster County, and therefore, when we went to apply for the local applications required to make the modifications to our store, that’s when a couple of the local municipalities said, ‘Hey, we don’t want VGTs in our backyard.’

“The lawsuits in two different municipalities were centered around the fact that their municipal codes did not prohibit us from putting those rooms in, and so, again, everything we were doing was under the law and their code didn’t prohibit us,” Hartman said. “That’s why we filed suit.”

In addition to Strasburg and Leola—the other Lancaster County township denying Rutter’s right to VGTs—Rutter’s filed suit against West Hempfield Township in Western Pennsylvania, which had held that zoning laws didn’t allow gambling at convenience stores.

The West Hempfield lawsuit was rendered moot when Stadium Casino was approved for a mini-casino there, allowing the township to opt out of truck stops under the 2017 law.

Before the other lawsuits could be heard, state lawmakers intervened, passing a targeted amendment to the expansion law giving the 60 municipalities in Lancaster County 60 days to pass resolutions to opt out of the truck stop gaming program. As of this writing, 37 municipalities, including Strasburg and Leola, have passed opt-out resolutions, and two more—Ephrata and Lancaster city—are poised to do so.

According to Hartman, Rutter’s is withdrawing the Lancaster County lawsuits without prejudice, “so we would have the right to reopen it if in the future the municipality opted back in. We’re working with the local municipalities to assure we’re not permanently removing the rights we had all along, but just suspending the exercise of the lawsuit.”

Meanwhile, Rutter’s is soldiering on with the work needed to finalize its other VGT applications—and the company is not stopping at the 21 currently on file.

“We currently have 10 we expect to be open this year,” Hartman said. “We have another 10 that we think will get approved in 2020, and then we have probably another 10 or 15 that are somewhere in between, with stores under construction and thus not eligible to be approved yet.

(The Illinois law, unlike Pennsylvania, provides that retailers can be approved for VGTs if they submit affidavits with supporting documentation showing estimated future sales, or past sales.)

“We also have stores that are close to the number,” added Hartman, “and then the question becomes once they hit that number, can we get approved, or do we have to do it for so many months?”

As the nascent VGT program in Pennsylvania gets these details sorted out, the Gaming Control Board continues to process applications, giving each location the scrutiny required under the law. “These establishments have to put in place a number of things to make sure these games are being run with integrity,” said Harbach.

“They’ve got to have cameras in place. We have to be able to access those cameras back here at the Gaming Control Board. They have to have a dedicated space there; it has to be in view of personnel. The personnel has to take a training course in identifying problem gambling. There are things that they certainly do have to have in place, even though it’s just five machines.”

Harbach added that there will likely be no objections from current casino licensees to the expansion of the VGT market. “In regard to the whole market, we’re talking about five machines at this point, unless the legislature changes it,” he said. “If you take that times how many might eventually get approved based on what our applications are, you’re not talking about a significant market.”

He also said there are no expectations that other municipalities will be clamoring for an opt-out provision with respect to truck-stop gaming, as municipalities generally welcome new revenue.

“The other thing to remember is that there was also a first-phase opt-out for this,” he said, noting that under the 2017 law, “the counties in which a casino already resided—and there were 12 counties (out of 67)—could opt out, and 10 of the 12 opted out. So you’ve got 10 counties where none of them could be placed, period.” Those include Philadelphia and Allegheny Counties, the two largest in the state.

As to whether Pennsylvania lawmakers will be satisfied with the VGT program as-is, or will bow to pressure from the tavern lobby, that remains to be seen. But all indications are that the casino lobby will prevail, and VGTs in the state will remain solely the companions of trucker showers, slushies and breakfast burritos.

Hooters to Rebrand a

Genting Goes All In