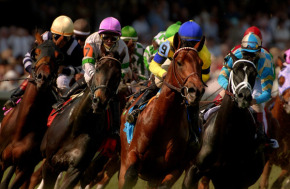 What does a second mean in horse racing? Often, everything.

The three Kentucky Derby prep races last weekend indicated the key for pace and positioning in the mid part of the event. By going out one second too fast, a horse can tire in the stretch. By being one second too slow, he won’t make up enough ground. This helps explain why none of the favorites prevailed in these high-level events and why one huge long shot did.

Blend this factor into your handicapping for the last Derby prelim, Saturday’s Arkansas Derby, and the May 6 Kentucky Derby.

The three high-profile events last week underscored key developments one half of a mile into them.

At the $750,000 Wood Memorial, Irish War Cry sat second in a moderate pace of just over 46 seconds. He was able to pass the leader down the stretch and prevail at 6-1 in a field of eight horses. The race stretched 1 1/8 miles, just shy of the Derby distance of 1 1/4 miles. Irish War Cry, at 7-2, was able to run his best race in a medium-sized field with no unusual pace considerations. The horse had been seventh in his previous outing.

A different theme of the pace story surrounded the $750,000 Santa Anita Derby, which featured a large 13-horse field. A “hot” start in this event, three horses pushing for the lead at just over 46 seconds, prompted eventual winner Gormley to hang back several lengths and move late. He passed the three tiring horses and prevailed at 6-1, benefiting from the “speed duel” that materialized early in the race. But did the horses setting the quick pace make a mistake? Usually, the answer is yes. But this time, two of them held on to finish second and third.

And then came the Blue Grass Stakes. Irap stole the $1 million showcase at a whopping 31-1 tag. Stole it because he was close up to a dawdling pace of 48.34 at the half-mile mark. The time was so slow that Irap had just enough left to hold off the closing horses. Irap set a record, becoming the first maiden ever to win the 93-year-old event. Give any horse a slow pace and you’ve invited an upset.

The pace scenario becomes even more prevalent in the Derby, which has 20 participants. Horses can’t afford to be caught in a speed duel, yet they often must be moved early to escape being trapped on the rail or forced outside. The variables are fascinating.

Time to find out “who are they”? The Giants, who stumbled on the road, have come home. The surging Orioles and Diamondbacks hit the road. We’ll soon know more about them.

Q&A: How States with