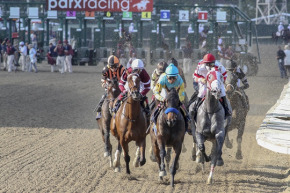 Big tracks like Saratoga and Churchill Downs routinely honor this tradition by unfurling a stream of big races throughout the season.

The industry also thrives when tracks with less cache pick up the habit. Parx Racing, a mid-level facility, storms to center stage this weekend. It delivers two million-dollar events Saturday, September 23, the Pennsylvania Derby and Cotillion Stakes. Parx adds the $300,000 Gallant Bob, $150,000 Champions Stakes and the $100,000 Alphabet Soup Stakes. This is a wonderful commitment totaling more than $2.5 million in purses for one afternoon. The lineup will lure serious players who demand value from big fields and dependability from top-flight horses.

This is a heartwarming saga for Parx Racing. Like nearby Delaware Park, its business was running at a mediocre pace until casino involvement changed the picture. Money from gambling enables the track to attract top horses, jockeys and trainers. Conversely, that entices big-money players and a fine audience to advertise innovations like the Parx Casino $50 million expansion set to be completed in early 2018. More foot traffic, more gaming eyeballs.

Saturday is the track’s signature day. Last year, the Pennsylvania Derby yielded a $1 trifecta worth $1,300. The Cotillion showcased Songbird, the eventual 3-year-old filly of the year, according to the National Thoroughbred Racing Association.

Saturday’s loaded card vividly illustrates the racing-gaming synergy. And, while Parx Racing owns the day, others complete a loaded card for gamblers.

On Sunday, the $400,000 Oklahoma Derby at Remington Park highlights a 10-race package of six-figure races across the country.

The tracks get it. Major events draw serious money.

Did you jump on the baseball bandwagon?

Two weeks ago, we described how the top baseball teams love to beat up on the weak ones in September. The Cleveland Indians underscored that. En route to their American League record 22-game winning streak, they won four road games against the lowly Chicago White Sox, three at home against Baltimore and Detroit, and three of four versus Kansas City over the past two weeks. None of their opponents will go to the post-season.

If you jumped on that trend, you cashed many tickets. Same goes if you took the Yankees and Red Sox, both 8-3 during this span against the likes of Tampa Bay, Baltimore, etc.

As for the NFL, watch for some artificially low over-under totals in upcoming weeks for Cincinnati, Seattle and San Francisco. What do they have in common? In two games, they have NO touchdowns. This could prompt a nice bet on the over in one of their games.