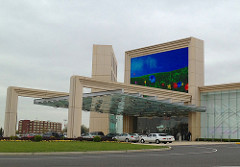 Parx Casino opened its retail sports book in January, and soon after opened a sports book at its South Philadelphia Turf Club off-track betting facility. Last week, Greenwood filed a petition with the Pennsylvania Gaming Control Board to open a second satellite sports book at its other OTB, Valley Forge Turf Club in Oaks.

The petition requests authorization to renovate the Turf Club, opened in 1996 as a horst-betting simulcast and OTB facility, to transform it into a satellite sports book. The petition describes the location, just off U.S. 422 and across from the Marketplace at Oaks, as “ideally suited” to cater to sports bettors. It also is located near the Pennsylvania Turnpike and several landmarks, such as Valley Forge national Park and the King of Prussia Mall.

The satellite facilities are authorized under Greenwood’s existing $10 million sports-betting license. In addition to the gaming board, the project requires the approval of the Pennsylvania Horse Racing Commission.

Greenwood did not disclose an opening date, or the anticipated cost of the renovation project.