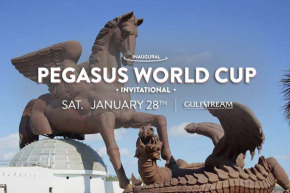 Did you know about the mammoth horse race?

Major events, during their infancy, may sneak up on the betting public, like the $16 million Pegasus World Cup January 27 at Gulfstream Park. That’s right, $16 million: the richest race in the entire world. And, it’s only two years old.

Gulfstream launched this showcase last year at $12 million, surpassing the Dubai World Cup as the industry’s most lucrative event. For good measure, it swelled the purse by a full third this year, ensuring a probable field of 12 and a substantial betting pool.

This is an instance where the interests of the betting public and race owners converge. As they do in the Breeders’ Cup, owners pay a hefty entry fee to seek a lucrative purse. The tracks offer inducements, in this case a guaranteed $650,000 return for anyone who paid $1 million to purchase one of the 12 available post positions. Gulfstream nominally added $4 million to the purse and figures, correctly, that money generated from gamblers will make its purse outlay easier to recoup.

Owners positioned this race to fill a lull in the campaign. The season-ending Breeders’ Cup will be held the first weekend in November this year. The Dubai cup runs in late March. A January showcase enables an owner to run in both the Pegasus and Dubai races. It also unfolds just before the North American breeding season.

The Pegasus is expected to be the final event for Gun Runner, the likely 2017 Horse of the Year. A triumph in this farewell event would boost Gun Runner’s breeding stock multi fold.

For the public, this gives the sport more focus as an unofficial season, marked by high points. The winter now packs the Pegasus and Dubai World Cup. Spring brings the Triple Crown and Kentucky Derby prep races. The fall fashions the Breeders’ Cup and summer highlights include the Arlington Million, Haskell Invitational and Saratoga’s six-week long festival of rich events.

In between those high moments, top tracks also load their weekend lineup. Gulfstream adds five events, all worth more than $100,000, to the Pegasus card. It also showcases a series of several top races under the Sunshine Millions heading on January 20. Tampa Bay, Oaklawn, Aqueduct, Golden Gate, Laurel and Santa Anita also weigh in with individual races surpassing $100,000.

The next two weekends should be a betting paradise.

Leading Up to the Super Bowl

If you’ve suffered some recent bad beats, keep that chin up. The pendulum eventually swings back. Bad beats, like all betting streaks, go in cycles. The absence of or refusal to kick an extra point affected the Eagles’ late-season push against the Oakland Raiders, Alabama’s national championship college victory and the New Orleans-Minnesota NFL playoff, a horrid double bad beat in some cases.

How do you handicap that? Bettors with New Orleans plus four got burned on an awful last-second touchdown by the Minnesota Vikings. But, the line had moved to five in some instances, and when the Vikings did not kick the extra point, it ended 29-24.

This is why you have blood-pressure medication.

Compelling NFL conference championships include three teams never to win a Super Bowl: Jacksonville, Philadelphia and Minnesota. They join New England, one team that forever finds a way to get things done.