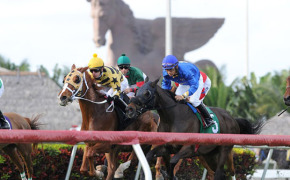 The Pegasus World Cup, January 26 from Gulfstream Park, takes a mammoth leap. It added a lucrative turf race and a crazy, irresistible bet that everyone should try at least once.

Each of these purses, $9 million and $7 million, represent the highest of any race in the United States. Each, for instance, is bigger than the $6 million Breeders’ Cup Classic. The Pegasus was $16 million last year, making it the richest race on the planet. That honor will now revert to the Dubai World Cup, $12 million, but the Pegasus gains two monster races and is, effectively, a good split of the atom.

The purse will naturally attract horsemen: Arrogate and Gun Runner, champions in 2017 and 2018, respectively, went on to become horse of the year.

Casual fans associate major horse racing with the Triple Crown (Kentucky Derby, Preakness and Belmont Stakes) in the spring, along with the Breeders’ Cup races in the fall. The Pegasus brings a winter anchor and it would not be surprising for future editions to unfurl like a Super Bowl, as in Pegasus Week.

By the way, keep glued to the Gulfstream Rainbow Pick Six pools. They are usually the last six races of the day and feature fields big enough to make it difficult, but not impossible to hit. Carryover pools expand rapidly and with events like the Pegasus and, later, the Florida Derby, immense money goes into these races—it jumped from $78,000 to over $123,000 on January 13 alone.

While favorites and underdogs take turns covering the championship game spreads, no home team has lost this key game outright since 2012.

Weather could play a role in the AFC championship game in Kansas City, but won’t be a factor for the NFC. Two great matchups involve the Saints and Rams, along with the Chiefs and Patriots. The Pats and Chiefs combined for 83 points the first time. Maybe this one’s in the 50s.