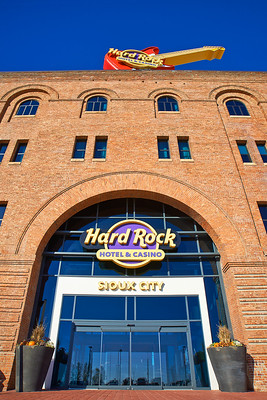 Peninsula Pacific Entertainment, which currently owns half of Hard Rock Hotel & Casino Sioux City (l.), has announced an agreement with Warner Gaming to purchase 100 percent of the property.

Peninsula Pacific Entertainment, which currently owns half of Hard Rock Hotel & Casino Sioux City, has announced an agreement with Warner Gaming to purchase 100 percent of the property. The agreement is expected to be finalized in the second quarter of 2020 based on regulatory approvals.

“Hard Rock Hotel & Casino Sioux City is a highly successful property that offers the best dining, gaming and entertainment experience in the region,” said M. Brent Stevens, Chairman and Managing Partner of Peninsula Pacific Entertainment. “We have a long history with Hard Rock, and in Iowa communities, and we are excited to continue to grow our community engagement and investment in Sioux City.”

No changes are expected to the day-to-day operations of the hotel and casino. All employees will continue with the organization.

“We have enjoyed the opportunity to be a part of Hard Rock Hotel & Casino Sioux City over the last six years,” said Bill Warner, CEO of Warner Gaming. “Moving forward, the property is in great hands with Peninsula Pacific Entertainment, and I look forward to seeing it continue to grow and thrive.”

The hotel and casino, which began operating in 2014, offers premier entertainment including more than 800 slot machines; 26 table games including craps, poker, blackjack and Texas hold ‘em; and three dining options, including the AAA Three Diamond-rated gastropub, Main + Abbey. Guests can also stay in one of the hotel’s AAA Four Diamond-rated luxurious rooms.

“Providing outstanding service and quality is a never-ending priority at each of our Peninsula Pacific Entertainment properties, including Hard Rock,” said Stevens. “This is a step in our direction to continue

improving the Siouxland with an exceptional place to work, a memorable place to stay or play, and a way for us to contribute to the region’s economy.”