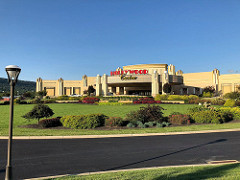 The company said it will partner with William Hill US in operating the sports books.

However, quick approval isn’t likely. The state’s Gaming Control Board does not meet again until September 12, but state officials have said that because of necessary licensing reviews they are not likely to approve any sports betting licenses before their Oct. 3 meeting.

“We believe this will provide us another attractive amenity at Hollywood Casino, in addition to our full suite of the latest slot machines, table games, multiple dining outlets, exciting live racing and soon-to-be online gaming offerings,” said Fred Lupkin, Hollywood’s vice president of marketing in a press release. “Our plan is to locate our sports book in a newly renovated simulcast theater area at Hollywood Casino and the operations will be managed by William Hill US, the largest sports betting operator in the United States.”

The application came after the gaming board passed new sports betting regulations designed to allow sports books to begin operating. Pennsylvania’s 12 licensed casinos can pay $10 million to operate sports betting in the state. That high licensing fee and a 36 percent tax on revenue was seen as hindering any movement by the state’s casinos into sports betting.

Though Penn National is the first to apply for a sports betting license, some previous announcements suggest more casinos will follow suit.

Parx Casino announced in July it would be partnering with London-based GAN for its sports betting platforms and Rush Street, owners of Sugarhouse and Rivers Casino in Pennsylvania, announced a partnership with Kambi Group for retail and online sports betting in May. Also, Mount Airy Casino recently announced it will partner with The Stars Group for sports betting.

Observers said most likely the state’s other 12 casino operators will apply for a sports betting license, despite the difficult financials. In comparison, West Virginia taxes sports betting revenue at 10 percent and in New Jersey it’s 8.5 percent. State Rep. Robert Matzie said despite the tax rate, the state’s casinos will be under pressure to offer sports betting. Mt. Airy Casino and Parx Casino both recently signed agreements with sports betting operators.

In a letter to the gaming board, the NFL wrote the state’s taxes and fees may “render legal market participants unable to effectively compete with the illegal market,” and suggested lawmakers “reconsider laws and regulations that could have unintended consequences of advancing illegal sports betting.”

Penn National Chief Executive Officer Tim Wilmott said, “Penn National is thrilled to begin offering sports wagering to our customers in Mississippi. Their excitement has been growing since the federal ban on sports betting was repealed in May, and we can’t wait to provide our patrons with another great amenity at our casinos.”

Penn National general manager for Tunica properties Justin Carter added, “Every time I step on the gaming floor a customer approaches me about sports betting. With the extreme passion in the region around sports, and college athletics in particular, we look forward to becoming a destination for fans in northern Mississippi, Memphis and Arkansas.”

Currently, Mississippi allows retail and mobile sports wagering only on casino property. State law does not allow mobile or online sports betting outside a casino property, so bettors can place wagers on smartphones while they’re on the casino grounds, but nowhere else.

Operators expect sports betting will account for around 2 percent of casino revenue, but hope it will attract visitors from neighboring states who will spend money on other games and amenities.

Gold Strike President and Chief Operating Officer David Tsai said, “The handle has been lower than we expect long-term. The better gauge for long-term volumes will be once football season kicks off in September. That said, our handle and betting volumes already exceed that in many Vegas casinos. We are seeing hundreds of guests coming on property to place sports wagers in our new sports book.”

Mississippi Gaming Commission Executive Director Allen Godfrey said sports betting is, “investment in property, that’s additional jobs. I think it’s going to drive revenue. How much revenue is dependent on the operators, it’s their job to promote it. It will be beneficial to the state if the operators do what they think it will do. If it drives additional foot traffic, and that foot traffic spends money, ultimately ends up in taxes that come to the state of Mississippi.”

Casino employees expect sports betting crowds to grow as football season starts. Hard Rock casino operations manager Russell Schneck said, “It’s definitely going to drive business into the property. We always get busy during football season. We’re going to have events. We’re going to bring in folks, and have VIPS, and maybe bring in some stars and this is going to be the place to be at whenever big sporting events happen.” Hollywood Casino Gulf Coast General Manager Mike Galle added with the area’s passion for SEC college football and New Orleans Saints NFL games, the property’s sports books will be “a great venue for customers to enjoy betting on sports.”

IP Casino General Manager Duncan McKenzie noted Mississippi is the only Southern state to operate legalized sports betting. “We’re first and we’re going to be first for a while,” he said. No surrounding state offers legal sports betting; West Virginia, which will launch sports betting September 1, is the closest sports-betting state. For now the only competition will come from Mississippi’s three Choctaw Nation casinos, which are not state-regulated; they plan to open sports books by the end of the summer.

William Hill has not yet been—but is expected to be—licensed by the Mississippi Gaming Commission to operate Penn National’s Mississippi casino sports books and six others it has signed agreements with, including Hard Rock, Palace and Treasure Bay casinos in Biloxi, Island View in Gulfport and Silver Slipper in Hancock County. SBTech has been licensed to operate in the state and will oversee Golden Nugget Casino Biloxi’s sports books. IGT and Scientific Games also have received their state licenses.

Godfrey noted the approval process for sports book operators is similar to slot machine manufacturers. The casinos must get approval for their rules, equipment, operations and staff before their sports books can open.

”I would say, anyone who has applied for a license, they’re just been waiting for themselves to get ready, getting equipment, hiring and training adequate personnel and installing and testing the software platforms. By football season, it would be hard for me to believe that unless something went drastically wrong that they wouldn’t all be up and running,” Godfrey said.

Mississippi will tax sports betting revenue at 12 percent, with 8 percent going to the state and 4 percent to local governments.

In West Virginia, William Hill has been licensed to operate the sports book at Penn National’s Hollywood Casino at Charles Town, opening September 1 near the Skybox Sports Bar. Hollywood Casino General Manager Scott Saunders said, “This region is a hotbed of both professional sports and college athletics, and we look forward to becoming a destination for fans in West Virginia, Virginia, Maryland and Washington, D.C.”

William Hill U.S. Chief Executive Officer Joe Asher said, “I’m really proud of the incredible work our team is doing to get us operational at Hollywood Casino at Charles Town Races. We’re proud to be working with Penn National and appreciate their confidence in us.”

West Virginia Lottery Commission Legal Counsel Danielle Boyd noted two other casinos are planning to launch sports betting in early- to mid-September, and two more will open several weeks later. Boyd said West Virginia will have a monopoly on sports betting in the region for now. She added sports betting will attract people to the state to place wagers at the casinos or other venues.

Besides on-site sports betting, West Virginia’s regulations also allow online and mobile wagering but Penn National has made no mention of any plans for that. Wilmott said the company does not plan to make any “huge investments” in sports betting; like Boyd, he said sports wagering will bring customers to the state’s gaming venues, not serve as a significant standalone revenue stream.