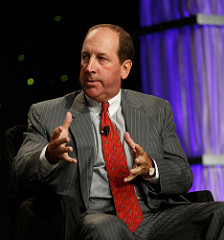 Once the merger with Las Vegas-based Pinnacle is completed, Penn National will operate a total of 41 properties in 20 states, with approximately 53,500 slot machines, 1,300 table games and 8,300 hotel rooms in the U.S. The transaction will allow Penn to enter three new states: Colorado, Louisiana and Iowa.

After the transaction was announced in December, to avoid anti-trust violations, Pinnacle said it would sell four of its Ameristar properties to Boyd Gaming Corporation for $575 million. At the same time, Boyd would sign a lease agreement with Gaming and Leisure Properties Inc., the landlord for Penn National and Pinnacle.

In March, the Federal Trade Commission issued a second request for “additional information and documentary material” regarding Penn National’s purchase of Pinnacle; the reason remains unclear.

In a call with investors, Penn National Chief Executive Officer Tim Wilmott said, “Having visited all of the Pinnacle properties, as well as their Las Vegas Service Center on multiple occasions, we remain very impressed by their talented property and corporate teams and continue to make meaningful progress with our integration planning. As we’ve learned more about Pinnacle’s operations and processes, we are confident our $100 million of cost synergy objectives are well within reach.”

Wilmott added the company will continue to seek additional regulatory approvals as it looks to close the transaction in the second half of 2018.