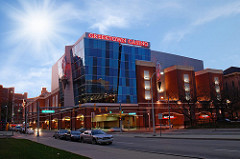 Penn National Gaming and real estate investment trust VICI Properties have reached an agreement with JACK Entertainment to buy Greektown Casino in Detroit for $1 billion. Under the terms of the deal, VICI will acquire the land and real estate assets of the property for $700 million, and Penn National will acquire the operating assets for $300 million. Upon closing in 2019, Penn National will enter into a triple net lease agreement with VICI for the facility, with an initial annual rent of approximately $55.6 million under an initial term of 15 years and four 5-year renewal options.

JACK Entertainment Founder and Chairman of Rock Ventures Dan Gilbert said only Greektown Casino will be sold–not his other gaming properties, including three casinos in Ohio and a stake in the Horseshoe Casino in Baltimore, although he has said he wants to exit the casino business. Gilbert also owns the National Basketball Association’s Cleveland Cavaliers. Greektown has $400 million in debt, but Gilbert said the sale “frees up significant capital to invest in our large developments that we’ve started and some are about to start soon.”

He added, “Our purchase of Greektown Casino-Hotel five and a half years ago, soon after its bankruptcy, allowed us to work with the great team at the property to create a winning culture and a vibrant business. The sale to Penn National and VICI Properties will allow that strong trajectory to continue and provide additional capital to continue our strategic investments in our Detroit real estate and business initiatives.”

Gilbert said the sale will close in 2019 after various regulatory reviews. “These deals have significant regulatory hurdles. We don’t foresee or expect significant issues, if any, but you never know in this world.”

Gilbert said Greektown’s 1,800 team members will transition with compensation and benefit packages at least comparable to their current levels. All unions representing Greektown team members will be recognized and all collective bargaining agreements will be assumed by Penn National at closing, he noted.

Penn National Chief Executive Officer Timothy Wilmott said, “Greektown Casino Hotel further strategically diversifies our revenue, operating and customer base and presents well-defined paths to the realization of significant synergies. The facility is extremely well-positioned in one of the nation’s largest regional gaming markets. At the same time, Greektown and its customers will benefit from becoming part of a larger gaming operator, with access to properties in Las Vegas and across the country. We are pleased to partner again with VICI Properties to structure this transaction in a manner that is immediately accretive to Penn National’s operating results upon closing.”

VICI Properties President and Chief Operating Officer John Payne noted, “We are proud to expand our partnership with Penn National, and add Greektown to our growing portfolio of market-leading gaming, hospitality and entertainment destinations. As the only casino located in Detroit’s historic central business district, Greektown, and its 30-story hotel tower, are ideally situated. Downtown Detroit is benefiting tremendously from billions of dollars of investment across the residential, commercial, entertainment and cultural infrastructure. The eight-acre property benefits from being in close proximity to the world-class sporting and entertainment venues, which are home to Detroit’s four major sports teams, as well as iconic locations such as GM’s Renaissance Center and the Cobo Center. The transaction represents another great example of VICI’s ability to source and execute accretive deals that bring value to our shareholders, while furthering our strategic goal to diversify our roster of best-in-class gaming operators.”

Analysts are giving the transaction positive review. Jefferies Analyst David Katz said, “The Detroit market is a positive addition to the portfolio and with regard to the expected accretion to cash flow.” Stifel Gaming Analyst Steven Wieczynski said, “We really like this deal for Penn both from the perspective of entering a new market coupled with the accretion to their free cash flow profile.” Deutsche Bank Gaming Analyst Carlo Santarelli said, “Given the reasonable purchase price, the addition of a new/untapped market for Penn and healthy commercial casino gross gaming revenue in Michigan, we believe the deal is likely to be well received.”

The transaction is the second deal with between Penn National and VICI, which was spun off from the bankruptcy reorganization of Caesars Entertainment. Penn National VICI announced in June they will jointly purchase Margaritaville Resort Casino in Bossier City, Louisiana, for $376 million. That deal is expected to close by the end of the year.

With the close of the Greektown transaction, Wyomissing, Pennsylvania-based Penn National will operate 41 gaming properties in 19 jurisdictions and New York City-based VICI will operate more than 20 properties in partnership with Caesars Entertainment.