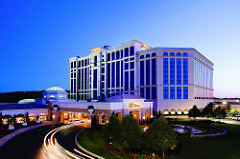 The Wall Street Journal last week reported that there are ongoing discussions between Penn National Gaming and Pinnacle Entertainment about Penn buying Pinnacle. The synergy became apparent last year when Pinnacle reached an agreement with Penn spinoff and REIT Gaming and Leisure Properties (GLPI) to buy all its real estate and lease back the properties for Pinnacle to operate.

Last week’s report estimated Penn’s market value at $2.09 billion, while Pinnacle was valued at $1.26 billion. Together, the companies would have an enterprise value of more than $13 billion. The combined companies would generate $5.4 billion annually with $1.5 million in adjusted annual EBITDA for 2016. These numbers would value Pinnacle in the low $30s, and a combined Penn could trade around $35 according to several analysts. Both companies were trading around $24 at the end of the day of the Journal report.

On an earnings call with investors, Anthony Sanfilippo, chief executive officer of Pinnacle, refused to comment on the article, calling it a “strange story” with no comments from “sources that would be considered credible.”

Penn National operates 27 facilities in the United States and Canada, including the Tropicana and M Resort in Las Vegas, Hollywood Casino at Charles Town Races in West Virginia, and Plainridge racetrack in Massachusetts.

Pinnacle owns and operates 16 gaming properties, including the Meadows Casino in Pennsylvania, Boomtown Casino Hotel in New Orleans, and the two L’Auberge properties in Louisiana, Lake Charles and Baton Rouge.

While there would be obvious cost savings in a combined company, some regulatory hurdles remain, particularly in Missouri and Indiana.