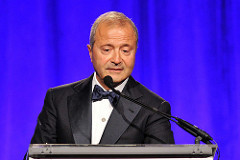 Watche “Bob” Manoukian, the Armenian billionaire who is the financial backer of Greenwood Gaming and principal owner of Greenwood’s Parx Casino at Philadelphia Park in Bensalem, last week appeared for the first time before the Pennsylvania Gaming Control Board.

The appearance at last Monday’s board hearing was to answer questions concerning his ownership stake in Stadium Casino, the consortium of Greenwood and Baltimore-based Cordish Companies that won the license to build and operate Philadelphia’s second casino.

The license application was sent back to the board by the state Supreme Court after the appeal of the award to the Stadium partnership based on the so-called 33.3 percent rule, which holds that no licensee owning 85 percent or more of an existing casino may own more than one-third of a second property. Manoukian owns 85.84 percent of the Parx casino.

This is the second time the board is re-examining the issue with respect to Manoukian. In the first examination of the appeal, the board found Manoukian to be within the legal ownership limits.

Manoukian testified before the board last week that the terms of his ownership in the Stadium partnership fall well within the limits of the law. He demonstrated that he is transferring #34 million into a trust for his three sons, who each will own a portion of Stadium Casino’s planned Philadelphia Live! Casino Hotel in South Philadelphia. “I have recently signed a binding agreement to fund the trust by outright and irrevocable gifts, and I will do so—I promise,” Manoukian testified.

Manoukian told the board that the trust will effectively be the partner to Cordish in the casino, and that he will have no financial interest in the Philadelphia Live! project.

The parties in the case will now file briefs, before the board makes its decision.

Meanwhile, Pennsylvania state Rep. Scott Petri, chairman of the House Gaming Oversight Committee, has filed a bill to eliminate the 33.3 percent rule, with the goal of expediting disposition of the Stadium appeal and opening the second Philadelphia casino.