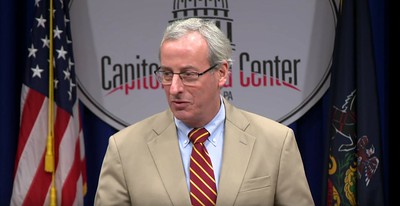 Pennsylvania casinos and lawmakers are re-examining how to treat smoking and drinking on gaming floors amid the ongoing Covid-19 pandemic. State Rep. Dan Frankel (l.) has introduced legislation to repeal the casino industry’s exemption to Pennsylvania’s Clean Indoor Air Act.

The Covid-19 pandemic and the reopening of Pennsylvania casinos with restrictions that include a ban on smoking, are forcing gaming operators, regulators and lawmakers to re-examine the issues of smoking and drinking on the casino floor.

State Rep. Dan Frankel of Pittsburgh, who introduced legislation early this year to repeal the casino industry’s exemption to Pennsylvania’s Clean Indoor Air Act of 2008—allowing casinos to be one of very few establishments to permit indoor smoking—told the Penn Bets news site last week that his bill has not seen any movement, even in the wake of Covid-19 casino shutdowns.

Frankel told the news site the reason is the gaming lobby, which fought hard for the casino smoking exemption in 2008 and continues to exert strong influence, despite the temporary smoking ban imposed by the Pennsylvania Gaming Control Board.

“They have an active lobby that was very effective when carving out that exemption when first passing the legislation, and they’re pretty effective in tamping down efforts to change it,” Frankel told Penn Bets.

The gaming board imposed the temporary ban as one of the safety restrictions mainly due to Governor Tom Wolf’s order requiring that masks be worn in all indoor locations. Board members have commented publicly that the smoking ban was imposed because of the simple fact that a person cannot wear a mask and smoke at the same time.

Penn National Gaming spokesman Eric Schippers, when asked by Penn Bets whether the temporary smoking ban may become permanent in the wake of the pandemic, was noncommittal.

“We are all trying to figure out what the ‘new normal’ is from an operational standpoint,” said Schippers. “We know historically that smoking bans can have a significant negative impact on revenue, but that is without an ongoing pandemic and mandatory mask policy, etc. (It is) just too speculative on many levels right now in terms of impact on business or customer behavior and what the future policy might be.”

Meanwhile, the state mask order has also raised concerns about allowing drinking on the gaming floor, since a mask must be removed to drink as well as smoke. Mohegan Sun Pocono announced last week it will stop serving alcoholic beverages on the casino floor in wake of the mask order from Wolf.

“In order to comply with Governor Wolf’s latest Covid-19 mitigation efforts, Mohegan Sun Pocono will temporarily suspend alcoholic beverage service on the gaming floor,” said a statement on the casino’s website. “Alcoholic beverages can be consumed while dining in our restaurants.”

Meanwhile, the Covid-19 pandemic had predictable results on the nation’s No. 2 commercial gaming state, as Pennsylvania logged an 18 percent drop in revenue for the fiscal year that ended June 30.

Due to the shutdown of casinos on March 17 and subsequent reopening on June 9 at 50 percent capacity, Pennsylvania recorded gaming revenue of $2.7 billion for the fiscal year, compared to a record $3.3 billion a year ago.

Revenue from slot machines was down by $680 million and table games were down by about $240 million, both nearly 30 percent. Those losses were mitigated by online gambling, which generated $240 million, and sports betting, which brought in $114 million in the first full year for both in Pennsylvania.