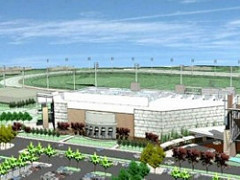 As municipalities across Pennsylvania pass resolutions to opt out of the mini-casino provision in the new gaming expansion law—banning the satellite facilities in their jurisdictions—some areas are actively pursuing the new facilities.

Among the first to court a mini-casino was Lawrence County in the western part of the state, home to the decade-long, beleaguered and ultimately canceled Valley View Downs/Lawrence Downs project. Valley View Downs was among the first batch of Category 1 racetrack casino licenses awarded after the state’s gaming law was passed in 2004. However, following a breakup of the first partnership that was granted the license, the project went through a parade of licensees that failed to arrange financing for the project, located near the town of New Castle. Ultimately, the Pennsylvania Gaming Control Board pulled the license, which ultimately was dubbed Lawrence Downs. The license has yet to be rebid.

A dozen years from the inception of Valley View Downs, Lawrence County officials are putting out the word to the 10 current eligible licensees to submit bids for one of the mini-casinos to be located in the county. “We intend to communicate to those 10 casinos and tell them our community would welcome them,” said Dan Vogler, chairman of the Lawrence County commissioners, in an interview with the Pittsburgh Post-Gazette.

“We want to strike while the iron is hot. Hopefully, our phone will ring, and we’ll welcome any of them with open arms. We’ll take them around and show them potential sites and hope to convince them it will be conducive.”

The mini-casinos under the new law will be bid on beginning January 15 by current Category 1 (racino) and Category 2 (stand-alone casino) licensees. (The two smaller Category 3 resort casinos do not qualify.) Each new facility will serve as a satellite location of the current licensee, with a maximum 750 slot machines and 30 table games. Licenses will be granted by auction, with a minimum bid of $7.5 million. Mini casinos must be located at least 25 miles from any current casino. Municipalities (except for counties) can pass a resolution to ban the satellite casinos by December 31.

Mid-sized cities such as Reading, Lancaster, Altoona, Williamsport, Gettysburg and State College have been cited as possible mini-casino locations. Within Lawrence County, only the small Little Beaver community has opted out. Penn National Gaming, which draws most of its business from outside of the law’s 25-mile buffer zone, is contemplating a lawsuit to block the satellite provision.

Meanwhile, two other municipalities have come out in favor of hosting mini-casinos. Members of the borough council of Curwensville, north of Altoona in west-central Pennsylvania, commented in their meeting last week that several locations within the borough would be perfect for a satellite casino. “There is good and bad with everything,” said Council President Tommy Wingard, addressing potential ill effects of a casino. “If we want business, we will have to deal with it. It would help the town out.”

And the city council of Reading, in the east-central part of the state, is expected to vote today to seek to host one of the mini-casinos. “The administration—I’ve talked with the mayor about it—has no problem with a casino being located within the city,” city Managing Director W. Glenn Steckman III said at last week’s council meeting. “He recognizes, obviously, that there are sometimes social issues that come with it, but he’s also looking for employment opportunities for city residents.”