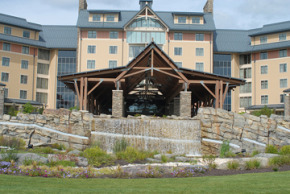 After weeks of inaction, there has been renewed interest in the recently approved mini-casinos in Pennsylvania.

Stadium Casino LLC, the partnership of Pennsylvania’s Greenwood Gaming & Entertainment and Baltimore’s Cordish Companies that is currently building the Live! casino hotel in South Philadelphia, last week became the first Pennsylvania casino licensee to pinpoint an exact location and submit a project plan for one of the 10 Category 4 “mini-casinos” created by last year’s gaming expansion law.

The first official plan submitted to the Pennsylvania Gaming Control Board is for a mini-casino in the two-story space currently occupied by the soon-to-close Bon-Ton store at Westmoreland Mall in Hempfield Township, on state Route 30 around 30 miles rom Pittsburgh.

On Wednesday, Stadium Casino and mall owner CBL Properties announced plans to develop an approximately 100,000-square-foot casino and entertainment complex in the space of the store, which will close in August. A construction timeline will be determined after the gaming board approves the project.

Stadium was the first licensee to submit its proposal without requesting an extension of the six-month period to pinpoint a location after being awarded a license, as three other projects have done. The partnership paid $40.1 million for the license, the second satellite casino license awarded.

The casino is projected to create more than 600 permanent jobs and generate millions of dollars annually for the local community.

“CBL’s strategy is to reinvent its properties by bringing new and exciting experiences to our shoppers,” said Steven Lebovitz, CBL’s chief executive officer. “We are adding fitness, dining, hotels and other uses to properties throughout our portfolio. The addition of a casino to Westmoreland Mall is the ultimate combination of entertainment, dining and experience.

“We are especially pleased to attract leading developers of high-profile gaming and entertainment destinations, such as the Cordish Companies and Greenwood Gaming & Entertainment. This combination of gaming and new dining venues, which is the first in the CBL portfolio, will draw new traffic to Westmoreland Mall from across the region, positioning the property for long-term growth and success.”

Joseph Weinberg, CEO of Cordish Global Gaming and partner in

Commenting on the announcement, Joe Weinberg, Partner in Stadium Casino, added, “We look forward to working with the Gaming Control Board, Hempfield Township and Westmoreland County in creating an exciting new destination in Westmoreland County. The property is ideally situated in the region, with excellent infrastructure and road networks in place. The synergy of this new gaming and entertainment facility with the existing retail and dining amenities in the property and surrounding area will be tremendous.”

State Senator Kim Ward, who represents Hempfield Township, was one of the main supporters of placing the mini-casino at the mall, and one of the sponsors of the mini-casino legislation last year. “I’ve worked for nine years to expand gaming to allow ancillary casinos, so it’s gratifying to see this finally come to fruition,” Ward said. “This project will bring a sizeable increase in our tax base, a significant number of full-time jobs, and will help revitalize the Westmoreland Mall complex.”

The mini-casinos are limited to 750 slot machines, and up to 30 table games with an additional fee. All must be tied to an existing casino licensee. Stadium has paid the extra fee, and will offer 30 table games in addition to the slots.

The state Gaming Control Board has granted Mount Airy Casino Resort a two-month extension on its deadline to pinpoint a location and provide a plan for its Category 4 mini-casino planned for Lawrence County in the western part of the state.

Mount Airy was the third successful bidder for one of 10 Category 4 licenses, which authorizes a satellite casino with a maximum of 750 slot machines and up to 30 table games with an additional $2 million fee. The operator’ winning bid, submitted in February, was just under $21.2 million.

Under Pennsylvania’s gaming expansion law, Category 4 licensees must identify a 15-mile radius within which the mini-casino will be located, and then have six months to pinpoint a location and provide a plan for the property. Mount Airy’s 15-mile radius is centered in New Castle, a city 50 miles northwest of Pittsburgh.

The extension gives Mount Airy until October 4 to identify an exact location. Lawrence County officials are eager for the facility to be built, after spending nearly 10 years as the host of a Category 1 racetrack casino that was never built. The planned Lawrence Downs went through several owners that failed to come up with financing, before the gaming board canceled the license, which has yet to be rebid.

While the commissioners signed a non-disclosure agreement, Commission Chairman Daniel Camp told the Beaver County Times last week that the county is a finalist to host the casino. The 15-mile radius also allows Mount Airy to consider properties in Butler and Mercer counties.

“We’re looking at an investment into the community in two ways: up to 500 permanent jobs once it is built and hundreds of construction jobs,” Camp told the newspaper. “The most important is the money the county and municipality will receive from the gambling tax.”

The extension, the second granted by the board, was one of two requested last week. Greenwood Gaming & Entertainment, owner of the Parx Casino in Bensalem, also asked for a two-month extension for its mini-casino plan, on a bid of $8.1 million submitted in February. Two weeks ago, Penn National Gaming was granted an extension on its plan for a mini-casino centered in York.

Penn National Gaming, which holds two of the 10 licenses for Category 4 mini-casinos created by last fall’s gaming expansion law, has dropped a lawsuit it filed shortly after the law was enacted that sought to invalidate the mini-casino program.

Penn filed a federal lawsuit in U.S. District Court seeking to block the Category 4 program on the basis that the law put the operator at a competitive disadvantage because of its requirement that no mini-casino can be located within 25 miles of an existing casino. Most of the customers of the operator’s flagship property, Hollywood Casino at Penn National Race Course outside Harrisburg, come from farther than 25 miles, a fact Penn said would cause cannibalization of its primary customer base.

Penn protected that customer base by winning the first satellite casino license, identifying a 15-mile radius centered in York, at an industry-topping bid of more than $50 million. It won a second mini-casino license in the second round of bids, for just over the $7.5 million minimum bid.

“We made a business decision to withdraw our lawsuits against the Category 4 law,” Schippers said. “While we continue to believe in the merits of our arguments, we have chosen to focus entirely on our development efforts for our two new casinos, rather than pursue what is likely to be a lengthy and costly legal battle.”