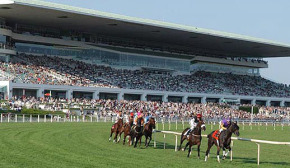 Saratoga and Arlington Park command center stage with million-dollar plus races in early August, while Mountaineer in West Virginia tosses patrons and bettors a bone with $500,000 and $200,000 races on one card.

Here are some points of interest for the biggest days.

Saratoga unfurls the $1.2 million Whitney Handicap on August 4. This is one of the bedrock events of its late-summer season, yet track officials wisely anchor it with multiple support stakes. They include:

All told, that provides more than $2 million in purse money just on major races in one afternoon.

Time change: The Derby, at 1 1/8 miles, will be one of nine races on a special Saturday card that will begin at 2 p.m. rather than the customary evening post time. It marks the first time Mountaineer hosts two graded stakes on one card, a nice step up.

Hall of Fame trainers Bob Baffert and Steve Asmussen will have some entries in the West Virginia Derby. Baffert trained the last two Triple Crown winners, American Pharoah and Justify.

The Rest of the August 4 Race Lineup

The Arlington Million and More on August 11

On August 11 comes the Arlington Million, a 1 1-4 mile turf showcase. The 2017 showcase revealed an interesting handicapping puzzle. Eventual winner Beach Patrol sat just off a slow pace, preserving just enough spark to gain a narrow victory. This happened in a large field, when one would normally expect at least some horses to engage in a hot duel. There was no duel. If you see a quality horse in a field devoid of early speed, expect him to hold on at the wire.

While the Arlington Million dominates the action, other events emerge: