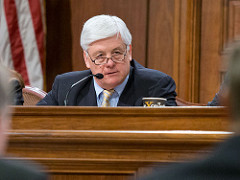 The online gaming portion of an omnibus gaming package just out of committee in the Pennsylvania state Senate is in danger of being killed out of the gate by a group of lawmakers led by Senator Tommy Tomlinson, who wants the tax rate on iGaming to be set more in line with the rates the land-based casinos pay.

The omnibus gaming package was approved by a state Senate committee as a shell bill without much more in the way of gaming expansion than tablet gaming in airports. Senators in a separate committed will now debate the particulars of potential online gaming, a replacement of the land-based host fee and other measures to be added to the gaming package.

Last week, Online Poker Report cited unnamed sources who said Tomlinson is gaining support for a tax of 25 percent or more on iGaming revenues, the highest rate of any proposal yet. Critics say the high tax would essentially kill the prospects for iGaming in the state, because the land-based operators designated as sole owners of the online casino sites would not be able to make money—and likely would not apply for licenses.

The state budget has figured on more than $100 million in license fees from land-based casinos and platform providers in a proposed online casino market. If operators don’t apply for licenses, an additional $300 million in projected tax revenues from iGaming would be lost as well.

OPR reports that according to its sources, Tomlinson is pushing for a tax rate comparable to land-based rates, which rake 54 percent of slot revenues and 16 percent of table revenues. The House bill passed last year set the tax rate at 14 percent, and other Senate proposals have set the rate at between 15 percent and 25 percent.

An OPR poll among New Jersey operators showed that only 5 cents of a dollar from online gambling revenue are profit for the operators, with the reminder going for advertising, fees, taxes and expenses, including partnerships with platform providers. Opponents of the new Senate proposal point to that fact in saying the higher tax would make the industry a non-starter.

“We wouldn’t apply for a license under those conditions,” a representative from one of Pennsylvania’s land-based casinos, who requested anonymity, told OPR. “Frankly, I can’t imagine a single casino in the state that would.”

In past debate, Tomlinson has repeated the erroneous claim that a lower tax rate for online play would motivate casinos to shift play away from their land-based casinos.

Meanwhile, one of the state Senate’s Republican leaders wants to steer the state away from any reliance on gambling revenues. Senate Majority Leader Jake Corman (R., Centre) argued last week that legislators should not be relying on “addictive products” to pay the state’s bills.