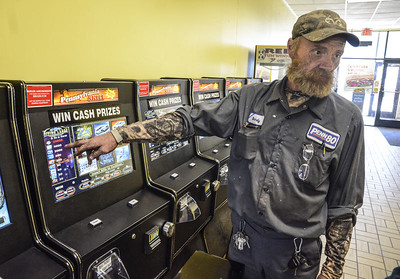 Unregulated slot-like “skill games” are still operating in many convenience stores, laundromats and other locations in Pennsylvania, despite the casino industry shutdown.

Unregulated, unlicensed gaming machines were a problem in Pennsylvania before the Covid-19 pandemic shut down the casino industry, prompting the Association of Gaming Equipment Manufacturers and the American Gaming Association to launch a campaign in February urging authorities to treat the machines, which multiplied at gas stations, convenience stores and even laundromats, as illegal gaming machines.

The Pennsylvania State Police Bureau of Liquor Control Enforcement did take action in late March and early April to enforce Governor Tom Wolf’s order that shut other businesses to the public, issuing four citations and 53 warnings, and suspension of two liquor licenses for failing to shut the games off from the public.

However, those efforts did nothing to shut down the machines at non-liquor-licensed establishments like convenience stores and laundromats. According to a report last week by PennLive.com, those machines are still operational in many convenience store locations, despite the shutdown of the industry and despite the state of emergency declared by Wolf in March, which stated:

“Operation of these machines during the current health emergency encourages people to congregate unnecessarily and is prohibited under the Governor’s order of March 19, 2020. Any business operating, servicing or otherwise maintaining a “Game of Skill” is subject to enforcement which may include an order to suspend otherwise authorized in-person operations.”

Most of the games involved are unregulated machines under the “Pennsylvania Skill” brand, manufactured by Pace-O-Matic (POM), which insists they are legal because of a dubious “skill” factor that can improve chances. In some cases, skill means seeing the result of one spin and deciding whether to wager on another. The games often display slot-like reels and play like slot machines.

PennLive.com reported that many of the “skill games” are still up and running in Pennsylvania convenience stores. The report quoted central Pennsylvania residents who are happy the games are available, since everything else is shut down.

There remains uncertainty concerning the legality of the machines, and POM is mired in legal fights to counter local seizures of its games as illegal slot machines. An attorney for POM told PennLive.com that once the pandemic is ended, the courts will settle the issue of their legality once and for all, but in the meantime, the company has advised all hosts of its games to unplug them while the health emergency exists.

The story quoted an unnamed store owner operating the machines as saying the games’ supplier advised they be unplugged, but after a few weeks of complaints from patrons, reopened them with safe social distancing between the machines, and a program of continuous disinfecting of the machines between uses.

“What they’re doing now is like making you wear masks and gloves if you want to play the machines,” a player told PennLive. “Most people that gamble on the machines don’t want a bunch of people around them anyway.”