Philadelphia Casino Gets Go Ahead 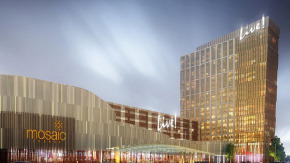 The Pennsylvania law that prevents the owner of one casino from owning more than 33 percent of another casino was intact after Watche “Bob” Manoukian said he’d put his interest in a hotel and casino proposed for Philadelphia’s Stadium Complex in a blind trust for his sons. Manoukian owns 85 percent of Parx Casino in Bensalem, Bucks County, and when he committed to putting aside his $34 million interest, it was a solution agreeable to the Pennsylvania Gaming Commission.

The casino will be a Live! Casino operated by the Cordish Companies, which owns and operates a casino of the same name in Ann Arundel County, Maryland, just outside of Baltimore. The facility would be located near the stadiums and arenas used by Philadelphia’s professional sports teams with 2,000 slot machines, 125 table games, 220-room hotel, and restaurants and shops. Cordish already operates an entertainment/retail/dining facility connected to the stadiums.

The partnership of Monoukian’s Greenwood Racing and Cordish received approval for the project from the gaming board in 2014, but the losing bidder, Market 8 Associates, went to court, citing Manoukian’s ownership of Parx. The court told the gaming board to reconsider the decision.

The board has given Market 8 30 days to appeal last week’s decision. If an appeal is filed, the Pennsylvania Supreme Court will hear arguments, which could further delay the beginning of construction on Live!