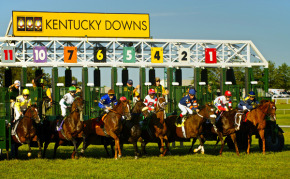 Racing fans envision a mix of majesty and grandeur in the next couple of weeks.

The Kentucky Downs turf layout is unique because about 7 furlongs from the finish line the course turns right. It gradually turns back left into the home stretch. This is one of only two North American tracks to utilize a right turn. The other is the downhill turf course at Santa Anita Park.

Turf racing purists love this sector of the sport. Horses prefer grass to dirt. They feel more support than on uneven dirt tracks and don’t have mud being shot back in their face from horses in front of them. A horse that is clear in the lane will win or lose based on running ability rather than if he found the best part of the track.

One key in handicapping big fields is whether the horse can avoid being stuck around the final turn. This usually bothers inside horses most.

Besides this terrific card, simulcast or online bettors can sink into six-figure races at Louisiana Downs, Hastings, Finger Lakes and Woodbine. Patrons who only want high-quality action can create their own super card, spread across several tracks.

The following weekend provides more blockbuster action, with Woodbine (near Toronto) offering events of $800,000 and $300,000. Belmont Park adds a $400,000 event. Racing is one of several sports geared for a strong month.

Watch the haves versus have-nots scenario that marks the final month of the season. This is when top teams surge to the wire against teams that are out of it. The acquisition of Justin Verlander by the Houston Astros may make them the post-season favorite.  October matchups involving the Washington Nationals, Chicago Cubs, Houston and the Los Angeles Dodgers are fascinating.

Can it be? New England-Kansas City kicks off the NFL slate September 7. An interesting prop was whether any team would lose more than 13 and a half games. It means every team in the league must win at least three games. That’s pretty much a referendum on the Cleveland Browns, whose over-under win total was four and a half games.

Two tremendous offerings unfurl over the next two weeks. Most observers believed Roman Gonzalez did not really lose by majority decision to Wisaksil Wangek in March at Madison Square Garden. Gonzalez is as much as a 4-1 favorite for Saturday’s rematch in Carson, California, great news if you like the other side. (Wangek also is known as Srisaket Sor Rungvisai.) Gennady Golovkin, GGG, remains a minus 150 against Canelo Alvarez, a plus 140, on Sept. 16 in Las Vegas. This is a great fan’s and bettor’s fight.