Play DFS for the Super Bowl 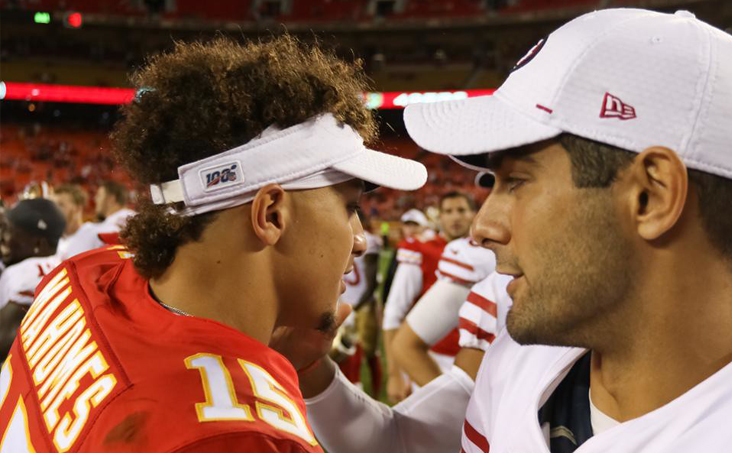 Even though the NFL Championship is only one game, Daily Fantasy Sites still offer fantasy games and big prizes on Super Bowl Sunday.

Regular players of Daily Fantasy Sports (DFS) know that, even though the NFL championship is a single game, there’s still the chance to play a fantasy line-up on Super Bowl Sunday. For those who regularly play DFS with a full schedule of NFL regular season games to choose from, that might come as a surprise.

Get a license to win at GoldenNugget.com! Build points to earn entries into a weekly $3,000+ giveaway. A drawing will be held every week the Community Points Goal is met. You could be one of 400 winners!

The DFS giants figured out ways to play DFS for single games a few years back, and both FanDuel and DraftKings are continuing that by offering Super Bowl contests with big cash prizes when the San Francisco 49ers play the Kansas City Chiefs in Miami on February 2. There are other options available at smaller DFS sites, so carefully check the scoring rules at any site you play.

The key, however, is that DFS players are picking from a much smaller roster of players—only two teams—and will likely pick many of the same guys. It’s hard to imagine, for example, that many players will skip picking Chiefs QB Patrick Mahomes (below) for their roster.

That’s where the roster salary caps come in. FanDuel players, for example, get a $60,000 salary cap. Obviously, a star like Mahomes will cost more than many other options—between $12,000 and $18,000. Winning often comes down to your last few picks, and whether you saved enough salary money to draft quality players who will help your final score.

With all this in mind, let’s look at some consensus picks for this matchup between the Chiefs and 49ers.

That’s heady stuff, but Mahomes will be facing a very tough 49ers defense that’s been dominant at times, but did allow Green Bay Packers quarterback Aaron Rodgers to throw for more than 300 yards in the NFC Championship game. Still, the 49ers have a great pass rushing defensive line, and might be able to contain Mahomes in the pocket.

In the end, however, you pretty much have to draft Mahomes. He’s a star. And he’s going to get his yards and his scores however the game goes. You’ll need to match those points, since everyone else will have him on their rosters.

Stash some cash with a risk-free sign-up bonus at BetAmerica.com. Opt in and bet and if your first settled sports wager loses, get your bet back as a bonus up to $1000.

Our Favorite Super B