Playing Together: New Tri-State Compact the Future of Online Gaming 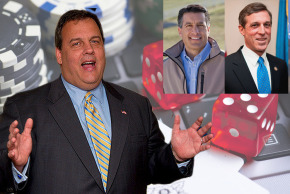 In a long-awaited move, New Jersey has entered into a player sharing agreement for online poker with Nevada and Delaware.

New Jersey Governor Chris Christie announced the deal, which was also signed by Nevada Governor Brian Sandoval and Delaware Governor John Carney. The three states are the only U.S. sates that have approved online gambling and online poker.

“New Jersey has been a pioneer in the development of authorized, regulated online gaming, which has been a budding success since its launch in late 2013,” Christie said in a press release. “Pooling players with Nevada and Delaware will enhance annual revenue growth, attract new consumers, and create opportunities for players and Internet gaming operators. This agreement marks the beginning of a new and exciting chapter for online gaming, and we look forward to working with our partners in Nevada and Delaware in this endeavor.”

New Jersey State Sen. Raymond Lesniak—a major proponent of the state’s online gambling laws—told NJ.com that he pushed for the agreement in an effort to make New Jersey “the Silicon Valley capital of internet gaming.”

“This is the first step,” Lesniak said. “The key factor here is having broader participation. You have to have a larger pool of players to make it interesting.”

Online poker revenue has suffered in all three states due in part to a lack of player liquidity. Initially, online sites in the three states were limited to players physically located in their jurisdictions. Due to the relatively small populations of Nevada and Delaware, online poker rooms in the two states have drawn only small player bases.

New Jersey, however, has by far the largest online market of the three states, helped by its population of close to 9 million. Still, that market—which has been averaging about $20 million in revenue a month—is largely driven by online slots and casino games and poker player bases are relatively small in the Garden State as well.

“Our technology team started to work with their colleagues in New Jersey and Delaware yesterday,” Nevada Gaming Control Board Chairman A.G. Burnett told the Las Vegas Review Journal. “It’s been a really great, collegial working environment with them.”

Officials in both Nevada and Delaware applauded the deal.

“New innovations and technological advancements are connecting more people and increasing the capabilities of Nevada’s gaming industry,” Nevada Governor Sandoval said in a press release. “Gaming is one of our oldest industries, and it’s imperative that we continue to look for new opportunities to explore its full potential in a changing frontier.”

The agreement also states that online revenue will be taxed at the rate set by the state the player is located in.

Officials said the agreement will lead to more online poker sites going on line in the sates. WSOP.com is the only site currently licensed in all three states. 888 Poker is partnered with WSOP.com in New Jersey. And 888 runs the poker sites in Delaware, as well.

However, analysts point out that a company such as MGM—which operates BorgataPoker and its own online casino brand in New Jersey—could easily seek to open an online poker site in Nevada to take advantage of the agreement.

Most likely, the Stars Group, which is licensed in New Jersey to offer the PokerStars site, would not be immediately licensed in Nevada. The previous incarnation of the company, Amaya, was put in a “penalty box” when Nevada legalized iPoker. It’s uncertain how long that period would last, but a major licensing push would have to be made in Nevada for the Stars Group to receive a license in the state.

The poker PAC, Poker Players Alliance (PPA), was pleased with the announcement.

“PPA applauds this move,” said Rich Muny, vice president of the Poker Players Alliance. “We have consistently sought expanded player pools for increased liquidity, allowing players more choices and variety. We also believe this will help other states to see that it is time for them to move forward on online poker and iGaming, as they may now be able to join with these states and not get left behind.

“Today’s action further demonstrates the tremendous success New Jersey, Nevada and Delaware have had in providing effective regulation, ensuring compliance with requirements for age and identity verification, geolocation, consumer protection and all other applicable federal, state, and local laws.

“It is also worth nothing that this agreement was reached between three governors: two Republicans and one Democrat. In an era of increasing partisanship, the online poker issue continues to be one with broad bipartisan support. Regardless of one’s politics, we can all agree that the American people should have the liberty to play poker in their own homes on their own computers.”