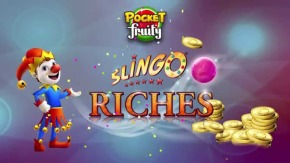 The games will soon be followed by some new versions of Slingo, a news release said.

“Slingo has been a fan favorite in the New Jersey game market for more than two decades, and we’re excited to bring Slingo to a whole new online audience,” said Richard Schwartz, president of Rush Street Interactive, operator of PlaySugarHouse.com.

“On PlaySugarHouse.com for the first time ever, Slingo fans can play Slingo games from their own home or actually anywhere in New Jersey, have loads of fun, and win real cash.”

The first Slingo game was created in 1995 by Sal Falciglia Sr. in the basement of his Ridgewood, New Jersey, home. Today, Slingo is played by millions of people worldwide on scratch lottery tickets, casino slots, mobile, social and other platforms.

The online Slingo games were developed by Gaming Realms and offer the best of slots and the best of bingo.

Falciglia says it’s amazing to see where the Slingo brand has gone, and he’s excited that Gaming Realms, the current owner and developer of Slingo, has launched the next platform for Slingo, online in the United States, in the state where it all began.

“Think about it. I invented the game in New Jersey in 1995. We launched the slot machines in Atlantic City in 2001 and now, in 2017, we’ve gone back to our roots to bring the online games to the USA,” he said. “Online gaming is the future for Slingo and I know it will be a success.  It’s been a hit on every platform around the world.”

Visit our Promotions page for the latest bonuses, offers and rewards at PlaySugarHouse.com and New Jersey’s other online casinos.