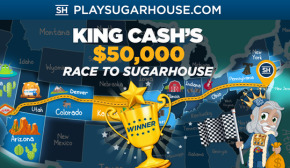 PlaySugarHouse.com has launched a new promotion: Where in the World is King Cash?

Players can go globetrotting to find King Cash and his bag of $100,000 bonus money. Those who find him have a chance of winning a share of the prize pool—the first player to do so wins the $3,000 grand prize.

The promotion runs through April 22.

Each destination reached gets players one step closer to finding King Cash. He will leave a postcard once you reach each city, hinting at his next location. Correctly answering his clue on the My Rewards page for a chance to win bonus money and board the next flight on the trek to catch King Cash.

Here’s an overview of the bonus money prizes that players can win after each destination:

Here’s a look at how players can earn flight miles:

Players that locate King Cash at his final destination will receive a Grand Prize based on fastest time there: