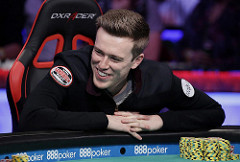 Poker pro Gordon Vayo has filed a lawsuit against PokerStars saying the company owes him about $692,000 in damages after denying him payment resulting from his May 2017 first place finish in “Event 1-H” of the PokerStars Spring Championship of Online Poker.

PokerStars maintains that Vayo played some parts of the tournament while in the U.S., violating geolocation rules.

According to Online Poker Report, the suit claims that after winning the event Vayo tried to withdraw his PokerStars account balance. He was then notified by PokerStars that the funds were being “frozen for investigation of suspicious activity” related to Vayo’s physical location during a portion of the event in question.

Vayo says the investigation by PokerStars lasted approximately one year, during which he was the victim of a “campaign of harassment” that included “prying into every aspect of his record” and demanding Vayo produce detailed retroactive proof of his location.

Vayo says he cooperated with the PokerStars investigation and “provided evidence showing that he was in Canada during the entirety of his play in the SCOOP tournament.”

However, PokerStars determined, “despite the evidence produced by Vayo, it was ‘not inconceivable’ that Mr. Vayo was in the U.S. at some point during the SCOOP tournament.” PokerStars informed him that he “had failed to produce evidence sufficient to ‘rebut’ their suspicion that Mr. Vayo was in the U.S. during a portion of the SCOOP tournament, and, as a result, Vayo would not be paid.”

Vayo argues in the lawsuit that the US District Court for the Central District of California “has subject matter jurisdiction over this action” and that the “Plaintiff asserts federal claims under the 1946 Lanham Act” pertaining to U.S. trademark laws.