HomePost TimePreakness predictions: Could Justify be a shoo-in?

Preakness predictions: Could Justify be a shoo-in? 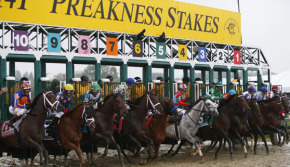 The Preakness Stakes, the second jewel of racing’s Triple Crown, reaps the tailwind from an exciting Kentucky Derby and the interest of the racing world.

Justify departed his winning Derby effort in good shape and is expected to run in the May 19 Preakness, which, at 1 3-16 miles, is slightly shorter than the Derby. The history of this event suggests that Derby winners often run well. The field is far less than the cumbersome 20 in Kentucky. Fewer traffic problems means that the eventual winner is likely to obtain a nice stalking position early in the event and take control around the final turn.

For many years, the Derby winner was almost a shoo-in here. That changed in recent times as a mediocre crop of horses took turns beating each other in Triple Crown races. The last Derby winner to prevail here was ultimate Triple Crown winner American Pharoah in 2015. That said, horses that ran well at the Derby will nonetheless be a short price here—often less than 2-1.

For history buffs, this race is named for a colt that won an early stakes race at Pimlico in 1870. The track also is famous for staging the 1938 match race between Seabiscuit and War Admiral, memorialized in the “Seabiscuit” movie. For those who think Congress doesn’t work enough, what better proof than the governmental body shutting down for a day to watch a champions race here in 1877? These days, they might disguise that by labeling the day off as an international meeting, which just happened to take place at the track.

As we projected, the winner was near the pace, prep-race winners occupied the top three spots and the Apollo Curse, named because no horse had won the Derby without racing as a 2-year-old since Apollo in 1882, was lifted with Justify’s win. Bettors were savvy and the $1 trifecta only paid $141, but the winning superfecta ticket with long shot Instilled Regard in fourth paid more than $19,000. If you found that horse, the longest shot in the field at nearly 100-1, congratulations. That’s a major coup.

Pimlico makes the Preakness a loaded weekend with a terrific Friday, May 18 lineup. It cards seven races worth at least $100,000, headlined by the $300,000 Pimlico Special. This is an excellent chance to preview how the track may play the following day and enjoy the big wagering pools on Friday.

The Futures: It’s Never Too Early

We’ve talked about taking a stab at long playoff prices before people catch on and drive down the odds. In that spirit, the Celtics opened in some establishments at 25-1 this week to win the NBA championship. With a 3-0 lead over Philadelphia and a looming matchup with Cleveland, they are the one notable stab. Everything else is a short price. At the very least, I’d take a shot at the Celtics beating LeBron James in the next series.

By contrast, try getting a price on the Vegas Golden Knights now. They are no longer a Cinderella story, but the best team on paper of the remaining four NHL Stanley Cup contenders. They were 200-1 before the season started, but only 7-1 by February and about 4-1 when the playoffs opened. Whether you got a bet down or not, enjoy watching this exciting team.