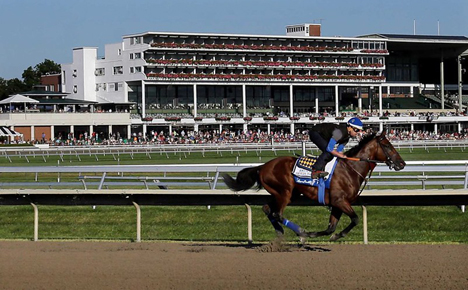 Mandaloun, Midnight Bourbon and Hot Rod Charlie. If you didn’t know better, you’d think you were naming the three favorites for the Louisiana Derby—which ran in March.

Mandaloun, Midnight Bourbon and Hot Rod Charlie. If you didn’t know better, you’d think you were watching three serious contenders for the Kentucky Derby—which ran in May.

Win the Haskell, and you stamp yourself as a first-tier 3-year-old—as Maximum Security and Authentic did the past two years—and get an all-expenses-paid berth in the Breeders’ Cup Classic.

Which brings us to the aforementioned trio headlining the Haskell’s seven-horse field. Mandaloun comes in after winning the Pegasus Stakes, the Haskell prep. Before that, he finished second in the Kentucky Derby to Medina Spirit. Mandaloun may shake that runner-up label, based on what happens with Medina Spirit’s positive test for a banned medication, betamethasone.

Trainer Brad Cox pointed the Into Mischief colt to this race right after his Derby placing, using the 1 1/16-mile Pegasus as an easy warm-up, instead of sending Mandaloun out in the Preakness and Belmont Stakes.

Trainer Steve Asmussen, who’s closing in on Dale Baird’s career record of 9,445 training victories, watched Midnight Bourbon finish a rocky sixth in the Derby, then seize the Preakness lead at three-sixteenths post, only to surrender it to Rombauer in the deep stretch. The ultra-consistent colt finished 3 ½ lengths back.

Now, Asmussen sends the son of Tiznow out with his fourth jockey in Paco Lopez, one of the more aggressive riders on any circuit. Midnight Bourbon is due for a breakout race. And with Mandaloun, Hot Rod Charlie and possible flavor-of-the-week Following Sea drawing money, Midnight Bourbon could bring under-the-radar value.

That’s if he can get past Hot Rod Charlie, with Flavien Prat in the irons for the third consecutive race. The Doug O’Neill trainee makes his first start since his electric runner-up finish to Essential Quality in the Belmont. The front-running Oxbow colt clocked the fastest opening quarter mile (22.78 seconds) in Belmont Stakes history.

His 46.49-second opening half mile was the second-fastest opening half in history, trailing only Secretariat’s 46.20-second opener during his iconic 31 ½-length romp in 1973. As a result, Hot Rod Charlie, his career-best 108 Beyer Speed Figure and second-place finish brought nearly as many plaudits as Essential Quality’s victory.

They should. Hot Rod Charlie hasn’t missed the board in his last six starts (2-2-2). He’s run against every front-row member his age, and beaten nearly all of them. Like Midnight Bourbon, Hot Rod Charlie doesn’t take races off. All of this, however, may get him overbet.

Following Sea will draw his fair share of money. But unlike Hot Rod Charlie, his money comes based on his connections, rather than his accomplishments. The one-time Bob Baffert charge is 2-for-3 after delivering a 6 ¼-length beating of his rivals in a Belmont Park allowance. That was the Runhappy colt’s debut race for new trainer Todd Pletcher, who inherited the colt from Baffert.

That came after owners Spendthrift Farm moved Following Sea cross country in the wake of Baffert’s medication issues and subsequent suspensions by Churchill Downs and the New York Racing Association. Following Sea won an Oaklawn Park maiden special weight in April for Baffert. He debuted with a third in his debut at Santa Anita, brought to him after he was dropped to third for interfering with Mr. Impossible.

Any Pletcher product running in a high-profile Eastern race like the Haskell will draw money. And while Following Sea defines “lightly races” with his three career starts, and defines “class leap” with his jump from allowance company to a Grade 1, he has shown the speed to contend in this field.

Pickin’ Time, Basso and Antigravity, who’s 2-for-2 at Monmouth Park, round out the field at the Haskell Stakes. Antigravity took 11 times to break his maiden, then won two Monmouth Park races in 20 days during June. In the second of those, an allowance, Antigravity beat sixth-place Basso by 9 ¼ lengths.

Get Exacta Insurance when you bet at TwinSpires.com. Get your bet back if your two selected horses finish in the first 3 home but not in the winning order. Applies to selected tracks each week. 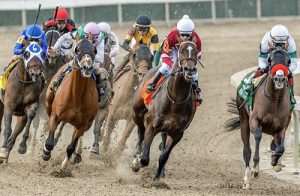 Nicknamed the “War on the Shore,” the Haskell is part of the Breeders’ Cup Challenge Series. It’s been a stakes race for 3-year-olds since 2006 and is the premier race at Monmouth Park, the Shore’s Greatest Stretch.

Four Grade 3 races are also on the July 17 card.

No one knows horse racing like Dawn Harris. Get her expert analyses and insights at iGamingPlayer.

Four Way to Cash In