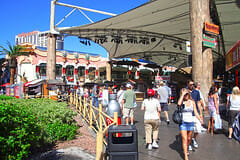 The owners of the Strip’s Showcase Mall are buying the location between the MGM Grand and Planet Hollywood, the Hawaiian Marketplace (l.), with plans to liven it up with all-new attractions. Observers lauded the acquisition as another enhancement to Las Vegas’ growing appeal for non-gamers.

Owners of the Showcase Mall on the Las Vegas Strip have bought 9.5 acres between the MGM Grand and Planet Hollywood for $172 million with plans to develop the parcel as a retail, dining and entertainment attraction.

The location currently is home to the Hawaiian Marketplace and retail shops with 700 feet of prime center-Strip frontage.

Gindi said in a statement it is working with its development and design teams to unveil plans for a “new flagship retail, entertainment and dining experience” that will be announced in the coming months. The company said professional services firm JLL will oversee leasing of development on the site.

“I see the Vegas Strip as Time Square West, with an incredible amount of foot traffic at a fraction of the rent,” said principal Eli Gindi.

“It means that resort retail is alive and well on the Strip,” said Mike Mixer, executive managing director for Colliers International Las Vegas. “Justifying a major casino development on the Strip at these prices is a challenge. I think retail proves it can pay more than casinos, and time and time again we have seen that in the last decade.”

“I think with the current market dynamics, there’s not a lot of new developers coming into the market that want to build a new hotel casino at this point in the cycle,” Parks said. “You have the two massive projects under construction (with Resorts World Las Vegas) or about to start construction (in the Drew). The market is waiting to get those open and see how it responds before looking to add any more supply to the market right now.”