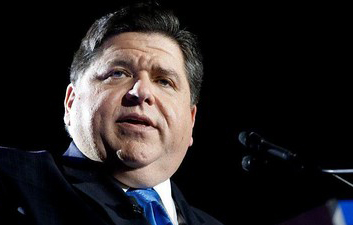 Illinois Governor J.B. Pritzker (l.) has signed legislation to lower taxes on revenue from a proposed downtown Chicago casino. Chicago Mayor Lori Lightfoot had lobbied to reduce the “onerous” tax, which a consultant said would scare off investors.

In addition, the bill will allow gaming machines at the Illinois State Fair and will provide Covid-19 relief for casinos and other gambling operations. The bill was approved during the state legislature’s special legislative session in May.

In a statement, Pritzker said, “Working with the general assembly and Mayor Lori Lightfoot, we accomplished what eluded so many others, and now this momentous legislation tackles key priorities for the state of Illinois by helping to ensure that Chicago can pay for first responders’ pensions and alleviate the burden on property taxpayers, along with investing in universities and hospitals throughout the state.”

He added, “Thousands of Illinoisans will be working on these projects, earning a good living that will support their families as we do the important work of rebuilding our crumbling infrastructure and investing in the future.”

Last year the state legislature passed a bill approving a Chicago casino license, but a comprehensive study by Las Vegas-based Union Gaming Analytics indicated due to the proposed “onerous” tax structure, finding investors for the project would be difficult since their profit margins would be in the low single digits.

As the law originally was written, a Chicago casino operator would have had to pay an upfront license application fee of $250,000, a $15 million reconciliation fee when the license was issued and up to $120 million in gambling-position fees. The operator also would have been required to pay an additional 33.3 percent privilege tax on top of the taxes paid by all Illinois casinos.

The new legislation offers a lower tax schedule ranging from 22.5 percent to 77.4 percent of adjusted gross receipts from slot machines, and 15 percent to 35 percent on table games. That revenue will be shared by the state and the city of Chicago. The bill also extends the time period for paying the reconciliation fee.

The legislation also will allow the Illinois Department of Agriculture to operate video gaming terminals at the Springfield and Du Quoin state fairs.

State Rep. Jay Hoffman said, “This legislation will provide jobs and economic opportunity for all of Illinois by helping fund the largest infrastructure improvement program in the history of the state”—Pritzker’s $45 billion “Rebuild Illinois” capital construction program.

Lightfoot lobbied lawmakers since the original bill was passed to win bipartisan support for the more favorable tax structure. She said the new casino will serve “as the impetus for a dynamic new entertainment district in our city.” No location for the new casino has been selected as yet.