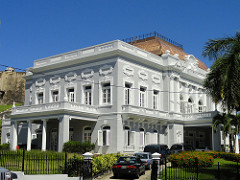 The measure, passed by the Legislative Assembly in November, gives the stamp of legality to some 25,000 previously gray market machines across the Caribbean island, which functions as a self-governing U.S. Commonwealth.

The law is part of a wider draft of new tax measures introduced by Rosselló in April aimed at providing the hurricane-wracked island with nearly US$2 billion in tax relief over the next five years.

According to the Senate President Thomas Rivera Schatz, the legal machines will generate about $160 million in tax revenue per year, 50 percent of which is earmarked for a police retirement fund and 45 percent for municipalities in need of assistance through an agency that administers an island-wide health insurance system.