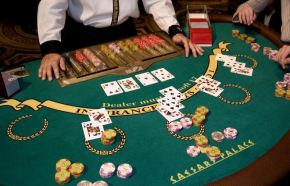 Blackjack is a fascinating game. If you play it correctly without “counting cards,” you can minimize the house advantage—without giving it away completely. If you count cards, you can get an advantage over the house, and that’s why brick-and-mortar casinos tenaciously look out for card counters and ban them.

Now that it is possible to play online, there is no one to stop someone from counting cards. But, ironically, the lack of a physical deck of cards in online blackjack means there is no advantage to counting cards when playing online.

iGamingPlayer.com spoke to John Bukofsky, author of “Blackjack: Play Like the Pros,” about the current state of blackjack, both online and in casinos. This is the first of a three-part interview with Bukofsky.

iGamingPlayer.com: So, John, how was it that you first got started playing blackjack?

Bukofsky: Believe it or not, one day when I was about 12 or 13, I came across a New York Times Magazine article that my father had left lying around, and it featured the late Ken Uston, and how he was making all kinds of money playing blackjack. I can still remember some of the pictures of him in Vegas and practicing alone with all these decks of cards stacked up to different heights on a table. I was fascinated by the idea that you could actually turn the odds in your favor by somehow keeping track of the cards.

I was hooked, instantly I’m sure, and not so much on the idea of gambling, but on the fact that blackjack could be beaten. I must have read and re-read that article 10 times. I remember wanting to become the next Ken Uston.

Most kids don’t idolize a professional gambler and certainly aren’t counting cards in a casino at 13.

Bukofsky: That’s right. And neither was I, for real. But I was practicing. I remember going to Atlantic City with my dad in the early days. He liked to play roulette, and so he’d go off and play, and I would go to the arcade until my quarters ran out. Then, I’d plant myself around the perimeter of a big hole in the floor in what then was called Caesars Boardwalk Regency. (It’s now an escalator opening, but it used to be a place you could look down on the tables from the second floor.)

I would stand up there for hours and count down shoes from above, until I was good enough to keep track of the cards, flawlessly. But, obviously, that was only half of the solution. I also had to get into the casinos to actually play. So I solved that problem by making fake IDs—ridiculous ones that actually made no sense; one was a fictitious college chemistry lab identification. That was a few years later when I was 15, and the legal age to gamble in New Jersey was 18.

I used to dress up in slacks and a sports coat in an effort to look older. Looking back now, it all seems funny and a little ridiculous—what I used to go through just to get a game. Of course, the casinos were a lot more lax back then than they are now, or were in later years, when under-aged kids starting getting in and losing daddy’s money, and daddy started suing the casinos for “letting” junior gamble. But by the time those days arrived, I had already become legal.

And so you started playing, first for smaller stakes before graduating to bigger play?

Bukofsky: Yes, like most, I crawled before I walked. And unlike most, I won more often than I lost. Looking back now, it’s surprising to me how much patience I had, even as a kid. Although the reality of the situation was that on most Friday nights, when my friends were back in the Bronx buying beer and hanging out, I was in A.C. with my old man eking out pocket change. But that’s where I wanted to be, and the experience was priceless. The more I played, the more I won, which, over time, enabled me to play for larger stakes.

Sheree Bykofsky is a literary agent, poker pro and the author of four poker books, including “The Kaizen of Poker” (ECW Press), forthcoming in September 2018. She represents John Bukofsky. The two are not related, even though their last names are similar.