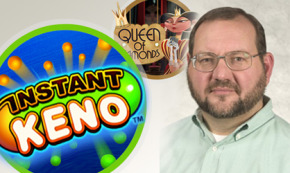 When big lottery jackpots come up for grabs—like the record-breaking $1.6 billion Powerball prize awarded in January 2016—even non-gamblers line up for a chance to strike it rich. Who hasn’t dreamed of winning millions, holding the giant check, and hearing from all those long-lost friends and relatives?

In the U.S., more often than not, those lucky winners bought their tickets from convenience stores or other retailers, because to date, only a handful of states offer online sales.

The slow rollout has been tied to concerns about player protection and security, and fears that 24/7 access to games will make some people bet the mortgage or the kids’ college fund.

But eventually state lotteries will have to jump on the digital bandwagon. Let’s face it. New generations of players—those “digital natives” who conduct every transaction on a smartphone—are unlikely to line up at 7-Eleven for a Mega Millions ticket. And without an influx of younger players, state governments will find it harder to fund senior care, education and all the other goodies paid for by their lotteries.

For insight on the potential of online lottery games, we talked to Jeff Holyfield, spokesman for the Michigan Lottery.

iGamingPlayer.com: Michigan launched its online lottery in August 2014. How’s it going so far?

Holyfield: Our digital products have turned in a strong performance since the launch. In 2015, players wagered about $147 million and won nearly $128 million. For 2016, players wagered more than $395 million online and won about $341 million.

We project that online games will provide an additional $480 million to the School Aid Fund, our beneficiary, in the first eight years of operation.

Online lotteries are supposedly a way to draw younger players—Gen X, Gen Y, and all the Gens that fall in behind. But some pundits say young people don’t line up to play, even when they can do so from their smartphones. What have you seen?

Holyfield: About 30 percent of our online players are in the 18-to-35 age group, a group that’s under-represented in the players for traditional games. So we’re expanding our player base by attracting younger players.

Among those registered to play games online in Michigan—more than 511,000 in all—the 26-to-55 age group represents 66 percent of players.

Are there plans to make online games more interactive to draw younger players?

Holyfield: We recently deployed Instant Win Gaming, a digital instant game provider from the UK. This will open the door to new instant-game themes and mechanics and broaden the product mix for our players on MichiganLottery.com. We now have quick access to IWG games and that’s exciting. It’ll be a great complement to our existing content, and bottom line, means a larger variety of games for players.

With our online game vendor, NeoPollard Interactive, we recently signed a contract with Inspired Entertainment to offer virtual events on our online game platform. The virtual events, which should go live in mid-2018, will be based on traditional draw-based game mechanics and use state-of-the-art digital animation to present the results of drawings. We’re using graphics and animation to make the display more entertaining for players.

With Michigan’s rich automobile history, we’re considering various car racing formats to provide the drawing results. But details regarding which events and when they’ll be offered haven’t been finalized.

What are the most popular games online?

Holyfield: Most wagers are made on instant games, which offer graphics and immediate results. Early indications are that players buy draw game tickets online as a convenience and prefer the interactivity of the online games.

When there’s a huge jackpot, do online as well as retail sales spike? To date, what’s been the biggest jackpot won by an online player?

Holyfield: While online sales do increase when jackpots rise, the bulk of tickets still are purchased at retailers. But three different players have won prizes of $1 million playing online.

We have four draw games online—Powerball, Mega Millions, Lotto 47, and Fantasy 5. But the Powerball option came, unfortunately, after that record $1.6 billion jackpot!

To learn how online lottery games work in the Wolverine State, visit MichiganLottery.com or check out video demos on Youtube.com.